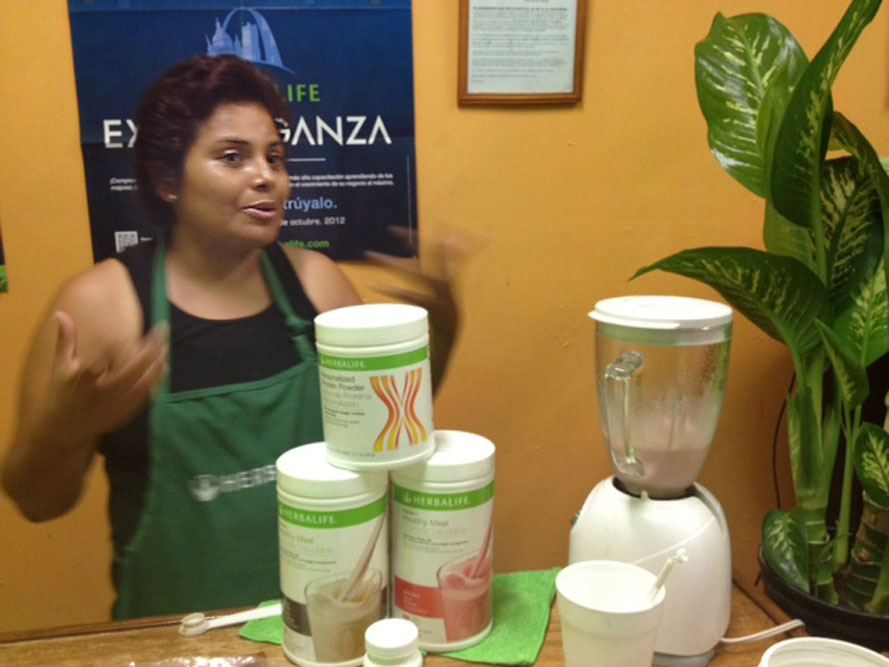 Editor’s Note: On July 15, 2016, the Federal Trade Commission announced that Herbalife must pay $200 million to compensate consumers who believed the company’s claims that they could get rich selling its diet and nutritional supplements and beauty products. The agency will also force Hebalife to restructure its operations. Boyle Heights Beat reporter Ericka Oropeza reported on these practices in 2013. Here is her story about how Herbalife operated in Boyle Heights, primarily drawing in a Spanish-speaking sales force and clientele.

A woman parks her car on the corner of Whittier and Soto streets in front of an unmarked building with bright green curtains. She gets out of her car with a crate full of powdered herbal supplements.
As she unlocks the storefront door, a line of men and women along with their children form a line beside her. Herbalife distributor Esther, who asked not to publish her last name, always welcomes her customers with a warm greeting. She has been doing it for five years.

The bright green-colored curtains on the storefront’s windows are the telltale sign of what’s inside. Green is also the color of Herbalife’s three-leaf logo, as well as the color of money. Herbalife sells nutritional shakes, powders, and vitamins through a network of individual distributors. The company reported $3.5 billion in sales worldwide in 2011.

Read how the author learned about Herbalife in a first-person reflection here.

Boyle Heights is full of these types of centers. They can be found in unmarked storefronts, garages, in the back of Zumba classes and even on street corners. There is no sign that says what’s inside or what time it opens. The fact that a lot of people start arriving at the same time gives the impression you need to be a member to go inside.

According to Marco Gonzalez, Senior Director of Corporate Communications for Herbalife North America, “All of these clubs are by invitation only, and people come because they already know someone or someone invited them or they got a flyer.”

The company does not sell its product through its own stores, but relies on local residents to sell its products to each other. Herbalife calls itself a multi-level marketer. Critics describe it as a pyramid scheme.

Many distributors are lured into the business in hopes of getting rich. Gonzales says 65 percent of Herbalife’s business in the United States is among Latinos. Distributors earn money from product sales as well as commissions from the sales of people they recruit to sell the product.

This business model is the center of a debate between some of the world’s top investors. In December, Hedge fund manager William Ackman said Herbalife was operating “the best managed pyramid scheme in the history of the world.” Ackman has charged that more than 90 percent of distributors make no money, or actually lose money, while those at the top earn money.

The accusations were followed by denials from Herbalife’s Chief Executive Officer Michael Johnson, as well as differing opinions from other investors. The news has hurt Herbalife stock, which has gone up and down wildly in the last three months. It has been reported that the Securities and Exchange Commission has opened an inquiry, and the Federal Trade Commission is looking into 192 complaints against the firm. Herbalife says in a recent press release that it is a having a “voluntary dialogue with regulators” and it is unaware of an investigation.

But news of the scandal hasn’t hit this neighborhood, and on the streets of Boyle Heights it’s business as usual for distributors.

Many customers find out about Herbalife and these “nutrition centers” through word of mouth or by receiving a card while they are walking down the street. The environment is a little different in every club: Some have weight lost challenges, or exercise classes, or reading clubs. Since each club is different some customers may like one place more than the other club. A customer named Eve said, “I came here because I was invited by my friend. She told me it was livelier than the other place we went to. That the ladies selling the shakes were always here and on time, and that they made good shakes.”

Esther recently closed her previous storefront because she ended a partnership. She moved to another location, where she can hold Zumba classes, as well as sell her product, to increase her income.
She says she earns about $1,500 a month from the sale of her products, and has recruited one person in the last month. She says she spends half of the money she earns buying Herbalife products and keeps the other half to live on — paying for the rent, bills and her own personal needs.

Herbalife officials say distributors are important to their business because they build relationships and teach consumers about health benefits.
The company provides the product and training to distributors who then do their own marketing, and selling. Distributors buy the product from the company.

In order to achieve their goals, many distributors promise the success of the product for health and weight loss. Esther, when speaking to a group of ladies said, “This is going to help you lose weight and slim down. Your fat will go away and your body will stay firm if you take your pills too.”

A former Herbalife customer, Sandra Reyes bought the supplements from a friend who recommended it to her. Like many customers, she took the products without questioning the ingredients. When the former Herbalife consumer was using the products, she bought three sets of pills and shakes, spending more than $4,000 in one year. She now believes it was a waste of money. “It’s expensive and once you get off it”¦ it just… stops and you gain the weight and some more weight,” said Reyes.

When consumers buy the product and make it at home then the distributor’s job is to explain how to use it, and follow up with them. But the high price of some of the items has resulted in many distributors selling products like shakes individually. Because Herbalife does not monitor the way the shakes are made or sold, there is the added concern of not knowing what may have been added to the shake.

The competition between distributors and the pressure to sell can also sometimes lead to false claims. When visiting one of these Herbalife Clubs, a Boyle Heights Beat reporter overheard a distributor saying that the Herbalife products can help if you have diabetes.

Some say it’s difficult to make money because of the number of distributors in the area. Others say that is not the case. Distributor Joseph Moon said, “Our intention is not to steal people’s customers, our intention is to always number one to get people healthy and also number two, is to build our business. But we don’t need to build our business by taking people’s customers; there are plenty of people out there.”

What does it take to become a Herbalife Distributor? Green Stuff