Not too long ago, Yolanda Corona only saw her doctor when her thyroid condition worsened. As an undocumented immigrant, the 42-year-old East Los Angeles resident did not qualify for Medi-Cal, the government-sponsored health insurance for the poor. She could not afford to pay for her medications and stopped treatment for almost a year–putting herself at risk of serious complications.

Like many undocumented Angelenos, she was unaware that Los Angeles County has provided subsidized health care to undocumented residents for some time under a variety of different programs.

It wasn’t until earlier this year that Corona began to receive regular care again under My Health LA (MHLA), a 61 million dollar program that pays clinics a monthly fee for each undocumented patient they 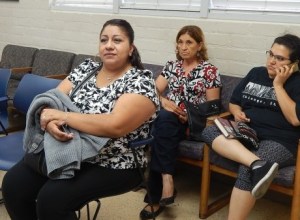 Yolanda Corona is a patient at Clínica Romero in Boyle Heights. Photo by Leticia Bárcenas

take on, regardless of the number of visits.

Interviewed in the waiting room at Clínica Monseñor Romero, Corona said that previously, she and her family “could only go to the doctor when there was an emergency, only when the situation was serious.” “It’s better here because I am preventing [illness], so the situation doesn’t become urgent.”

Corona is one of an estimated 1.5 million uninsured undocumented Californians who do not qualify for Medi-Cal or subsidized health insurance under Covered California, the state health exchange set up under the Affordable Care Act, including approximately 700,000 in Los Angeles County.

“When we talk about health for all, there is a big population of people who normally aren’t considered under the ‘all,’” said Gerson Sorto, a staff attorney with Neighborhood Legal Services of Los Angeles County. “When the Affordable Care Act came, it made some real revolutionary changes into how people were able to access care, (but) it didn’t really provide expanded services for the undocumented.”

Also this summer, Governor Jerry Brown reached a compromise with legislators who had proposed extending Medi-Cal coverage to all undocumented immigrants in the state. A new state budget will instead extend government-subsidized health coverage to about 170,000 undocumented children, starting in May 2016.

MHLA is a no-cost health care program for Los Angeles County residents who are six or older, whose family income is less than 138 percent of the federal poverty level and who do not qualify for other health programs like Medi-Cal or for subsidies under the Affordable Care Act. As of July, 120,000 patients had enrolled in MHLA.

Under MHLA, patients are assigned one of the participating clinics as a “medical home” where they go for free primary care and health screenings, chronic disease management and prescription medications. For specialty care, they are referred to county facilities, such as the LAC + USC Medical Center in Boyle Heights.

Neighborhood Legal Services (NLSLA), an advocacy group that provides assistance with medical debt management and problems with health plans, is one of several community groups working to expand MHLA awareness and recruit patients.

“A lot of times, people don’t know that the program exists,” said Sorto. “They don’t know how to get it. They have never been to a clinic. Or maybe they have concerns that if they go to the clinic and they are undocumented, something may happen to them.”

“What we heard from some of the families was,  ‘I’ve never gone to the doctor. I wouldn’t have signed on to this had it not been somewhere that I trust, like at my church,’” said Sorto.

Boyle Heights’ Clínica Romero began signing up MHLA patients in February, according to Rebecca Pleitez, community relations and policy director. In the first two months, the clinic signed up as many as 3,500 patients to MHLA, including many who previously paid out of pocket for services, she said.

“It’s the population we serve. That’s who we’ve always served,” said Pleitez. She explained that volunteer doctors founded the clinic in 1983 to provide services for Salvadoran war refugees. Its patients are almost all monolingual Spanish speakers.

Even within the expansion of services available under MHLA, subsidized treatments for some serious conditions, like transplants, remain unavailable for undocumented residents.

“It’s really frustrating for people that believe that people should receive services regardless of their immigration status,” said Pleitez. “Everybody should have a right to health care. Health care is a right, not a privilege.”