Boyle Heights is one of the densest neighborhoods in Los Angeles, which makes overnight parking on city streets tough for all residents. But it seems likely that no one in Boyle Heights has it worse than the families of Estrada Courts, Ramona Gardens and, to a slightly lesser extent, Pico Gardens. These public housing developments are isolated communities, and its residents are bound by rules and special circumstances that make finding parking even more difficult. 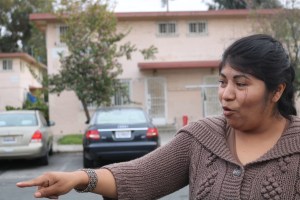 “I have lived here for nine years, and it keeps getting worse, says Ramona Gardens resident Ana Bryant.

Simply put, there are fewer parking spaces than residents with cars.

“The issue is that when the development was built, they did not anticipate the number of people having cars,” says Mario Ramsey, manager at Ramona Gardens and Pico Gardens.

Ramona Gardens and Estrada Courts, two of the city’s oldest housing projects, were built in the 1940s, when not every family could afford a car. Nowadays, Ramsey says, some families have as many as four or five adult members, each with a car.

Ramona Gardens and Estrada Courts have small parking lots near clusters of apartment buildings. Residents receive one parking permit per household, but they are not assigned a space because there are around 350 spaces and almost 500 apartments. 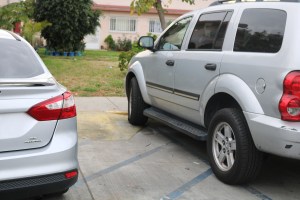 Some residents of the Ramona Gardens housing project are forced to park in unauthorized spaces.

Ramsey, an employee of the city’s Housing Authority (HACLA), has suggested that Ramona Gardens residents park on the streets outside the development, but he said many fear vandalization of their cars or an assault while walking home late at night.

Sometimes, people without permits take their chances and park in the lots. Cecilia Cerda, who has lived at Estrada Courts for 15 years, says sometimes residents have no other choice.

“One weekend my husband couldn’t find parking outside, and he parked inside the parking lot just for a few minutes while he unloaded the groceries, and they gave him a ticket,” she recalled. “So I had to pay the fine.”

Even leaders in the public housing complex have suffered from the shortage of spaces. At Ramona Gardens, Bryant is the recently elected president of the Residents Advisory Council. She remembered one night when her children were small and she was out getting groceries.

“It was already night time, and the children had already fallen asleep. recalled Bryant. She parked on the blue stripes next to a spot reserved for a handicapped driver and planned to move the car in the morning. “At 4:20 a.m., I had a $320 ticket she said.

Bryant says that the parking issue has been brought up at practically every RAC meeting, and residents have complained to HACLA. But the city agency says there is no space for additional parking. 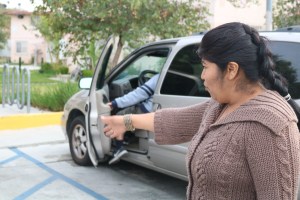 Ramsey said building new spaces is probably not a priority for HACLA or for the federal Department of Housing and Urban Development. If anything, he said, the agencies would be interested in building more housing.

Meanwhile, an LAPD officer said that any innovative solutions would have to involve the city’s Department of Transportation, which is in charge of street parking. Officers assigned to Ramona Gardens say they have been looking into a solution, but have found the city’s bureaucracy challenging.

The manager said the situation is slightly different at Pico Gardens, a gated development built in 2000, where some residents get up to two permits and all are all assigned spaces. Only families with more than two cars have to park in nearby streets.

Asked if the city had plans for adding more public transportation to the housing projects, Ramsey said that would probably benefit only the seniors. He noted: “This is California. People don’t want to take the bus. Everyone wants to drive.”