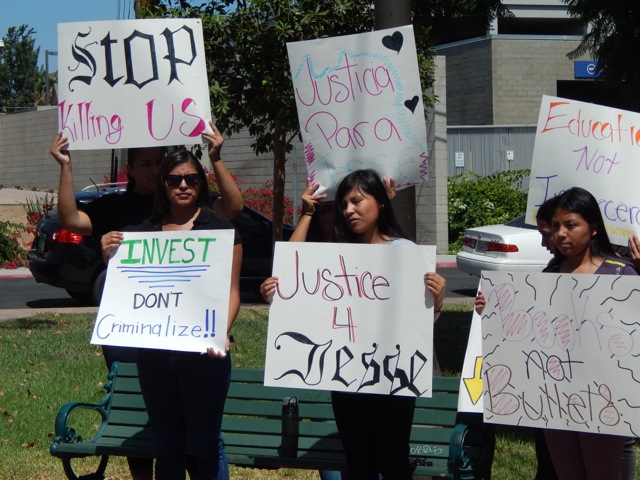 For Jesica Ríos, it was devastating to hear that 14-year-old Jesse Romero was killed by police officers investigating a report of vandalism on a busy Boyle Heights Street.

“A 14 year old boy shouldn’t be killed just for tagging,” said Ríos, herself only 15 and a Boyle Heights resident. “I think police should be trained to have other options for youth. He was 14. I don’t think it’s right for a youth to be killed just for [committing] an error.”

Police say that Romero had a gun and that he may have shot at officers who were pursuing him. While police still investigate the incident, the officer involved shooting that ended the life of Jesse James Romero has moved a Boyle Heights community already affected by increasing violence.

“It’s tragic. And it creates an opportunity for us to have an honest conversation for the need for more youth investment,” said Lou Calanche, executive director of Legacy LA and co-chair of the Boyle Heights for Youth campaign. 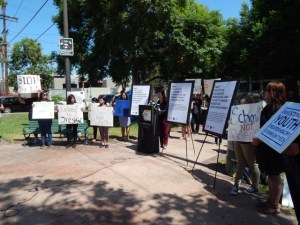 “Whether he had a gun or not –that’s not the issue,” Calanche said. “First of all, he shouldn’t have had a gun and he should have been involved in some kind of program at 14 years old. So it’s time for an honest conversation about what kinds of programs we’re providing our youth.”

Calanche and Ríos spoke at a press conference Friday morning at Ross Valencia Pocket Park, a small swath of green space across the street from the Hollenbeck Police Station. They were there to advocate for a Boyle Heights For Youth campaign to fund a city department of youth development.

“We can’t continue to see youth lives as disposable,” Calanche said in a statement. “Given that the City spends 70 times more on police than it does on youth, it is critical that as a city we view increased investment in positive youth development programs as a critical public safety strategy as well.”

The Boyle Heights For Youth campaign is a collaboration between 23 nonprofit organizations working with pre-teens, teens and young adults in the neighborhood. It is part of the Building Healthy Communities (BHC) Boyle Heights initiative funded by The California Endowment. 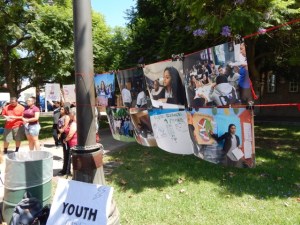 According to campaign literature, investing more funds in programs directed at youth development is a way of reducing “the criminalization of youth” and minimizing the opportunity for violent encounters between police and the estimated 800,000 residents of Los Angeles between the ages of 10 and 24.

Joe Díaz, who works with Boyle Heights youth as part of the City of Los Angeles Youth Opportunities Program at the Boyle Heights Technology Center, said that having access to such programs helped him survive growing up in the Aliso Pico housing development.  Díaz said that there are many programs available for youth growing up in Boyle Heights, but that often kids and their families are not aware of them.

“Our youth have so many opportunities,” said Díaz.  “[The issue is] how do we get the parents to be involved with the nonprofits that are here. If we were to put them together, they would go from Boyle to Soto with no problem, that’s how many nonprofits there are here.”

Jeanny Marroquín, director of academic support programs at Legacy LA, agreed that accessibility to such opportunities is often an issue for inner-city families. Marroquín, who works with students in middle school, high school and college, said that Romero’s death particularly affected her.

Fifteen-year-old Ríos said that the killing of Jesse Romero made her feel vulnerable in her own community.

“That hurt me really hard, because I live in Boyle Heights,” the teen said. “[There’s] a really big risk of it happening to me. I have more fear of the police than [a feeling of safety]  around them, just because I’m Latina and brown.”

Ríos, who participates in programs both at Legacy LA and Inner City Struggle, said there is no easy answer to the question of how police should change their tactics when dealing with youth.

“It’s not an easy thing to tell the police you have to change your strategy, ‘you can’t just kill,’” she said. “Because they have a gun and if they feel threatened they’re going to use it.”

But Ríos did say that the city has a responsibility for securing the safety of its youth.

“We’re asking the city to [provide] more money on youth, because youth is the future,” she said. “If you don’t [put] money in the future, you’re not going to have the future you want.”

An earlier version of this story stated Jesica Ríos age incorrectly. This story was updated on Aug. 16 to reflect that she’s 15.