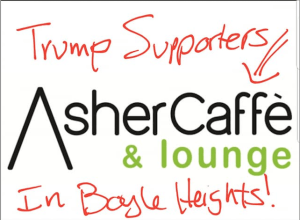 A coalition of community-based organizations that fights against gentrification in Boyle Heights is calling for a boycott of a new kosher bakery and restaurant in the neighborhood, claiming the owner supports president Trump and his anti-immigrant policies.

The group, Defend Boyle Heights, posted a “hood alert” about Asher Caffe & Lounge and owner Asher Salom on its Facebook page, saying in part that he “is an out and proud xenophobe and Trump supporter. He is also part of the #GentryClass trying to bring more alcohol into the community.”

Coalition members announced Thursday they would protest in front of the restaurant starting at 7 pm.

The alert included screenshots of various tweets from 2016 and 2017 that were retweeted by Salom’s Twitter account. They appear to show his support for Trump prior to his election and shortly after he took office.

One of the social media posts is a retweet of a February, 2017 tweet by the president, in which he proclaims “Our legal system is broken! “77% of refugees allowed into U.S. since travel reprieve hail from seven suspect countries.” (WT)  SO DANGEROUS!”

Our legal system is broken! “77% of refugees allowed into U.S. since travel reprieve hail from seven suspect countries.” (WT) SO DANGEROUS!

The last post currently on the @AsherShalom account is from August –a retweet of a Fox News post claiming that more than one million jobs were added to the U.S. economy since Trump took office last year.

In its Facebook post, Defend Boyle Heights called for a boycott of the restaurant and asked sympathizers to show up at the business at a “special event” planned for Thursday.

Boyle Heights Beat attempted unsuccessfully to reach Shalom Thursday at the restaurant. A man who identified himself as the general manager confirmed that a “grand opening” was indeed planned for Thursday but would not go into detail, saying he did not have time to speak to a reporter.

When asked if he knew about opposition to the business he said: “It’s really a shame that people [in the community] don’t support” a business that hires people of all nationalities. He also said the business serves food to all people without discriminating.

The Beat has learned that the Boyle Heights Chamber of Commerce rescinded Shalom’s membership on Tuesday and returned his paid dues.

Chamber president Jennifer Lahoda said the action was taken not because of Shalom’s apparent support of Trump, but because of a pair of anti-immigrant posts on the businessman’s Facebook page that chamber members were made aware of.

“We rescinded his membership Tuesday because of public statements he made regarding immigrants that are not in line with the chamber’s values and objectives,” Lahoda said. She added the membership would not be participating in Thursday’s opening where it was supposed to provide a “ribbon cutting” ceremony.

Some anti-immigrant posts, purportedly from Shalom’s Facebook, were also published on Defend Boyle Heights page. Boyle Heights Beat was unable to confirm that they were posted by Shalom. 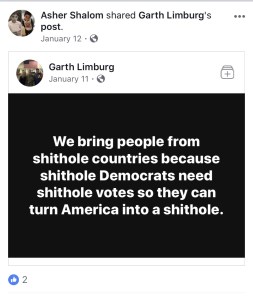 Located at a former medical office at 945 South Boyle Ave., on the Western edge of Boyle Heights, the bakery and coffee shop has been open since a “soft launch” late March. According to an April 26 post on hoodline, the “new spot, located in the heart of downtown LA, serves up everything from  homemade pastries and fresh salads to cups of milk coffee and beer and wine.”

Shalom, who has reportedly spent 40 years in the textile business, is the owner of Asher Fabric Concepts, a fabric and textile distributor. In 2015, the company opened a showroom on Boyle Avenue, directly across from the recently opened eatery. The company reportedly supplies fabrics for the U.S. Olympic team.

In January, Eater LA posted that Shalom’s foray into a food operation was “A passion project for Asher, the eatery will be completely kosher. According to project manager Sergio L. Yang, the food will have a heavy European influence.”

“The cafe wants to serve wine and beer, but are still waiting for approval.” the January post continued. “Yang cites the hold up thanks to Boyle Heights being very strict when dispensing ABC licenses.”

In June of 2017, Defend Boyle Heights led a protest and boycott of Weird Wave Coffee, calling the operation on César Chávez Avenue a “gentrifying business”.

Protesters claimed then that the presence of a craft coffee shop in neighborhoods like Boyle Heights creates an environment where real estate buyers and developers raise rental rates.