Most parents expect their children to bury them and not the other way around. But two Boyle Heights families face the grief of losing their teen sons, both shot and killed this year by officers from the Los Angeles Police Department. 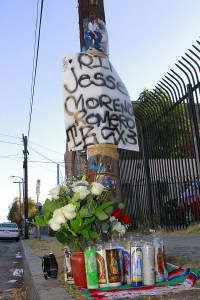 Altar for Jesse Romero, shot and killed by police on Aug. 9. Photo by Art Torres

Boyle Heights remains deeply shaken by the police shootings of 16-year-old José Juan Méndez on February 6 and of 14-year-old Jesse Romero on August 9. Méndez was shot during a traffic stop near Lorena and 6th. Police say that he was driving a stolen vehicle and was armed with a sawed-off shotgun. Romero was being pursued on foot by officers who said they caught him vandalizing private property on César Chávez Avenue. Police say he was armed and that he shot at officers pursuing him before they fatally wounded him.

Both teen deaths moved residents and community activists, who protested the high number of officer-involved shootings in the neighborhood. Méndez and Romero were two out of five people killed by the LAPD in Boyle Heights in the first eight months of the year; the agency has had 13 fatal officer-involved shootings so far in 2016, with most taking place in Boyle Heights.

Both the Méndez and Romero cases are still under investigation by the LAPD and families of both teens have said they plan to bring civil cases against the city. But these tragic deaths shine a light on issues faced by many families in the community, who struggle to keep their children away from risky or illegal activities.

At a community rally, Juan Méndez shows a picture of his son José Méndez, who was killed in an officer-involved shooting on Feb. 6. Photo by Antonio Mejías-Rentas

Counselors who work closely with at-risk teens in Boyle Heights say that multiple social factors, such as poverty and immigration status, make if difficult for parents to effectively monitor their children’s activity. Having to work one or more low-paying jobs, often facing long commutes on public transportation, keeps them from watching over their children at a time when they are beginning to explore the world. That can be especially difficult in a neighborhood like Boyle Heights, where police say more than 30 gangs are known to operate.

Parents in Boyle Heights can have a hard time understanding what’s going on in their teens’ lives, said Iliana Garcia, Community School Achievement Coordinator for Promesa Boyle Heights at Proyecto Pastoral. García works with challenged Seniors at Felicitas and Gonzalo Méndez High School, helping them get on track to graduate.

“Students are really vulnerable and exposed to violence in our community, and it’s something that we really don’t talk about,” said García, 25, who grew up in Boyle Heights and was raised by a single, undocumented mother.

A family shares its grief and bewilderment

In interviews following Jesse Romero’s death, his mother Teresa Domínguez said her son was a “good boy” and that she was not aware of his involvement in gangs. Romero attended Méndez High School until May and it’s been reported that after dropping out he became a client of a program at Soledad Enrichment Action, a nonprofit that offers gang intervention services. Following Romero’s death, photographs circulated throughout social media suggested that he might have been involved with Tiny Boys, a local gang. Domínguez turned down Boyle Heights Beat request for an interview. 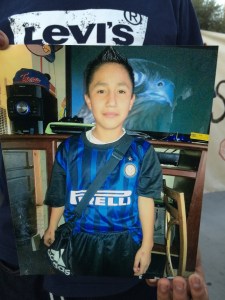 Undated family picture of José Méndez, who was nicknamed Peruzzi for his talent as a soccer player. Photo by Antonio Mejías-Rentas

But another grieving family was willing to share its story. In a long conversation in the front yard of their small Boyle Heights home, Juan Méndez and Josefina Rizo, the parents of José Méndez, recalled the incidents that led to the tragedy that changed their family forever. They spoke candidly about their son’s drug addiction and his problems saying on track in school.

Méndez said his son was a happy-go-lucky kid.

“There was always a smile on José’s face,” said the elder Méndez. “I never saw him upset. Even when I was scolding him, he was making a face.”

He was his father’s consentido, the spoiled youngest of his seven children when the family migrated from Mexico City in 2005. Méndez described him as inquieto and juguetón, restless and playful, and said that he loved lucha libre and playing with his siblings while wearing a luchador mask.

But the young boy’s passion was soccer, a sport in which he excelled. His father nicknamed him Peruzzi, after a famous Italian goalkeeper, because of his talent with the ball. Méndez’s proudest moment was when his son, at 13, scored three goals in a championship game in which his team won 5-1. “Here he is, the smallest one,” said Méndez pointing out to a team photo taken after the 2012 game.

That photo and the championship trophy are among the many mementos that the family keeps on an altar dedicated to the boy in their front yard.

But Méndez said it wasn’t often that he could see his son play. At first he worked two jobs to support his family, which grew to nine children with two born in Los Angeles. Eventually Méndez found a steady job in a kitchen at a downtown hotel, and was able to bring his wife in to help too, busing tables.

Rizo, José’s mother, recalled having to leave her youngest children in the care of her oldest daughter, just a month after giving birth, to go back to work. She stopped working after an accident in 2010. 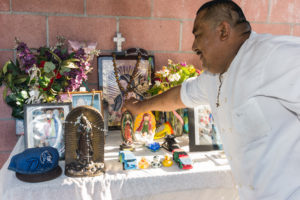 Juan Méndez points to one of the photos in his home’s altar to his son José. Photo by Ernesto Orozco

Méndez recalled how he began noticing changes in his son’s behavior in March 2015, when he was 15.

“He started acting strange, he slept a lot,” said the father, who noticed that the son stopped going to classes at Theodore Roosevelt High School. “There was a change in personality. They called me from his school and I went. I finally realized that he was using drugs.”

Méndez said that he did not know what drugs his son used, but because they had health insurance, they took him to a drug addiction facility affiliated with Kaiser Permanente. Méndez said that the boy, who turned 16 last September, began dating a girl a few years older than him, and that he started staying out late and stopped coming home for several days at a time.

“What I know feel is that he got lost in sex and drugs,” said Méndez, who recalled trying to counsel the boy when he would show up at the home sporadically.

The younger Méndez continue to get in trouble and was picked up by the police several times and was eventually sent to a court-ordered rehabilitation program at the Rancho San Antonio home for boys in Chatsworth. That’s where on January 3, during a family visit, Méndez was able to get a photo with all of his children –save for an older son who was working.

The altar. Photo by Ernesto Orozco.

That same day, right after the family visit, the boy ran away from the center and was picked up by police, who took him to his family home. As the police warned the father that the boy would face arrest if he didn’t return to rehab, the teen walked into the family house, went out a back door, and ran away. That was the last time the family saw him alive.

“After that January 3, the next time we saw José was in a casket”, said the elder Méndez.

Teens who keep secrets from their families

Lou Calanche, executive director of Legacy LA –a nonprofit that provides services and programs to youth in Ramona Gardens– say that it’s not unusual for parents in Boyle Heights to be unaware of the trouble their teens may be getting into.

“When kids hit adolescence, they’re not that happy to share information with their parents,” Calanche said. “And If you live in a poor neighborhood there’s less resources, there’s more police involvement, parents are working [and they] are stressed out.”

García, at Proyecto Pastoral, agrees. “It’s been shown that poverty and immigration status play a big role on the rate of violence in a community,” she said. “And it’s primarily because we don’t have as many resources available, which makes families vulnerable.”

Even when there are services available, she pointed out, parents don’t always know how to access them.

Méndez and Rizo say that the shooting of their 16-year-old has left their younger children traumatized. They are attending family therapy with their nine-year-old-boy and six-year-old girl.

Rizo now regrets having brought her family here from Mexico. “I think that if I had stayed there this would not have happened to me.”

Her husband says that he no longer sees his job as his priority. “After what has happened to me, I’ve learned to live life differently. Work is necessary, but so is sharing with the family and children. We have them today but from one day to another we may not.”

Photo above: Juan Méndez and Josefina Rizo hold a family picture and an urn holding their son Jose’s ashes in front of an altar dedicated to the teen shot by LAPD in February. The shooting is under investigation. Photo by Ernesto Orozco.