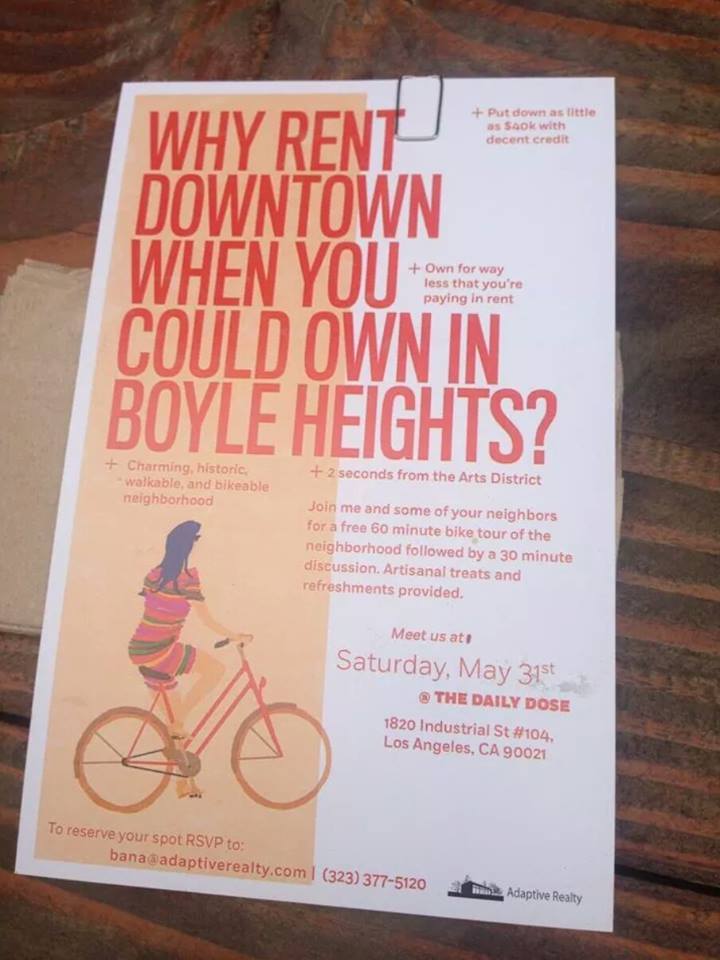 When I first saw the flyer at right pop up in my social media feeds yesterday morning, I actually thought it was a joke.

Touting Boyle Heights as a “charming, historic, walkable, and bikeable neighborhood” where you could put down “as little as $40K with decent credit,” it invited Arts District neighbors to join in on a (free!) hour bike tour followed by a discussion and artisanal snacks.

No one who knew anything about Boyle Heights could possibly think this was a good idea, right?

In one fell swoop, the flyer embodies every single one of residents’ worst fears: a passel of hipster outsiders coming in to stake their claims while munching on “artisanal” snacks because Boyle Heights’ own offerings did not appeal to their more refined sensibilities.

Few things have ever screamed, “I have no interest in getting to know this community!” quite so effectively.

And, it didn’t help that the flyers had only been distributed in the Arts District (just across the river from Boyle Heights), meaning that residents were finding out about it secondhand and thus left to construct their own narratives about who was behind it and what their intentions were.

Hoping to figure out what the story was, I immediately reached out to Adaptive Realty and spoke with Bana Haffar, a realtor and the organizer of the event.

It was before noon when we spoke, but she was already getting pushback about the event.

The negativity seemed to have taken her by surprise. She had looked at a tour in a community she liked as a positive thing. And, as an immigrant from an embattled community herself, she felt she understood the value of community, being a good neighbor, and not pushing others out.

And, she noted, she was only tapping into a reality that is already well underway ”” property values are on the rise and turnover has been happening in the area for some time. Boyle Heights is no longer just an Ellis Island for new immigrants. Beyond acting as a refuge for those looking to escape high rents elsewhere around the city, it is also serving as that first gateway for transplants to L.A. I just met four of them on the train this weekend, incidentally. They knew so little about the community that they had convinced themselves that their pad near Mariachi Plaza was in the heart of East L.A.

As part of a small real estate group dealing in smaller holdings, Haffar seemed to believe they might be able to help make positive contributions to the area (i.e. being better landlords to local renters) and bring in people who also were interested in building community.

Read the full story at LA.Streetsblog.org