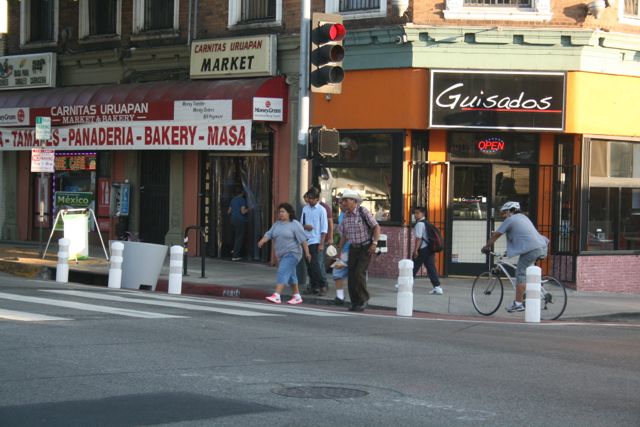 Los Angeles Mayor Eric Garcetti came to Boyle Heights this week to sign an executive directive that orders various departments to join the city’s Vision Zero initiative, intended to eliminate all traffic-related deaths in the area by 2025.

“We have to think big and work hard when it comes to keeping people safe,” the mayor said in a press release. “It is tragic that 200 people are killed each year while moving about our city. With more people walking and biking than ever before, we must use every available tool to save lives. I am determined to bring that number down to zero.”

Vision Zero, a concept developed in Sweden, is based on the principle that human error must be factored in when developing traffic policy. It states that “traffic deaths can be avoided through strategic, data-driven approaches to engineering, enforcement, education, evaluation, and community engagement,” according to the city’s release.

Vision Zero has been official Los Angeles Policy for several months. Last September the Los Angeles Department of Transportation (LADOT) adopted it as part of its internal strategic plan and in April Garcetti included it in his Sustainability “pLAn”. Vision Zero is also part of the city’s Mobility Plan 2035, that the city council approved this month.

With his executive directive the mayor orders various other departments –including Police, Fire, Public Works and Water & Power– to report back by Dec. 1 with specific recommendations for measures that would cut traffic-related deaths by 20% by 2017.

The directive also calls for the formation of a Vision Zero Task Force and an Executive Steering Committee that will work on proposals to eradicate deadly accidents on Los Angeles streets by 2025. 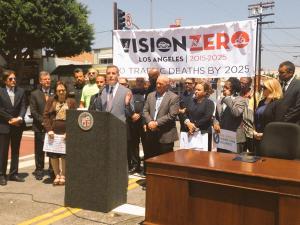 Mayor Garcetti adresses the crowd gathered at the corner of César Chávez and St. Louis. PHOTO: City of Los Angeles

Garcetti signed his directive Monday at a noon ceremony on the corner of César Chávez Avenue and St. Louis Street, where various city officials including Councilmembers Mike Bonin and Mitchell Englander joined him. Area councilmember José Huizar was conspicuously absent from the ceremony.

That corner is one of several along César Chávez that have recently seen its pedestrian crosswalks altered as part of the mayor’s Great Streets initiative. At these intersections, high visibility crosswalks, painted curb extensions and traffic signals that give pedestrians a head start are intended to decrease injury collisions on the neighborhood’s busiest street.

According to the city, César Chávez Avenue has a higher rate of occurrences of injury collisions when compared to similar streets in Los Angeles. According to a recent survey by the Los Angeles Times, there were 23 pedestrians hit in collisions on the corner of César Chávez and Soto Street between 2002 and 2013 –making it one of the city’s most dangerous intersections.

The Los Angeles Vision Zero initiative will focus on improving safety on those streets with the highest number of life-threatening collisions.

More information about Vision Zero can be found at visionzero.lacity.org