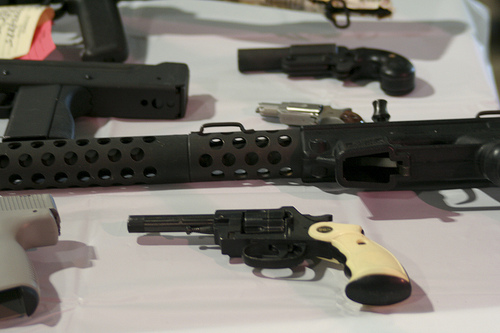 Boyle Heights Beat: Do you have any innovative approaches to keep our communities safe? How will you work with others who, for example, are against guns or want to keep guns. What’s your take on that?

Garcetti: There’s a lot of things I’ve worked on for safety in general. I helped create with the Mayor Summer Night Lights which keeps our parks open in the summertime now until midnight instead of closing them down at sunset and have arts and athletics programs. Every single park we’ve brought that to has reduced crime by about 40 percent.

And that came out of an experience in my district in Glassell Park when a 16-year-old girl was walking with her boyfriend a block and a half from a park and somebody rolled up and shot her in the back and killed her. When that park was closed instead of it being a place that could have been safe. We started with one park. It’s in 32 parks now.

Making sure we have a police force that comes from our community that understands constitutional policing but that also has the numbers to be able to protect us. In terms of gun violence: outlawing .50 caliber weapons and bullets in the city of L.A. Doing work to crack down on concealed weapons or recently we started a program with the city attorney to go after “straw buyers,” which are people who can legally buy guns, but they buy them to pass on to people who can’t legally have guns.

There’s a 10-day waiting period when you buy a weapon in California”” we have good laws in California. What we did was: we told people who purchased guns, we gave them letter from the city attorney of L.A. saying if you’re giving this to somebody else that’s illegal and you’re going to go to jail. And guess what? Only about half the people showed up to pick up the gun. They had already paid for it. They had already given the money. That letter was enough to scare away almost half of them. It shows how many people in L.A. are buying guns.

We need to make sure it’s easier to get mental health care then a gun, and right now it’s the opposite.