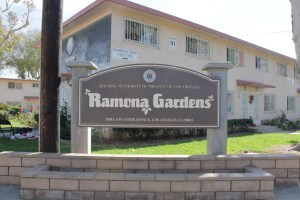 Police say that only eight of the 25 suspects arrested Wednesday were found in Ramona Gardens. Photo: Boyle Heights Beat archives

Authorities expect that a major raid this week on the Big Hazard gang will have long lasting benefits for Boyle Heights residents, particularly those who live in Ramona Gardens.

A total of 38 people were sought in a federal indictment that resulted from a three-year investigation, including Manuel Larry Johnson, or “Cricket,” a member of the prison-based Mexican Mafia gang who authorities say gave orders to Big Hazard. Seven others named were already behind bars. One died over the weekend in Ramona Gardens under unclear circumstances. Authorities were still searching for the remaining five.

“We have moved to take control of the neighborhood, “ said Acting U.S. Attorney Stephanie Yonekura at a press conference Wednesday.

The indictment outlines 45 criminal counts including alleged racketeering, drugs and weapons possession and violent crimes including hate crimes and violence against community members and rival gangs.

Although Big Hazard has historic ties to Ramona Gardens dating back several decades, its criminal operations are known to extend beyond the housing complex. Captain Martín Baeza, the commanding officer for the LAPD Hollenbeck division said that Wednesday’s sweep reached 34 locations in and around Los Angeles.

Baeza said 430 of the agents involved in Operation Resident Evil were Los Angeles Police Department officers, but he declined to say how many were assigned to Hollenbeck. Law enforcement officials from the Federal Bureau of Investigations, the Bureau of Alcohol, Tobacco, Firearms, and Explosives and the Internal Revenue Service were also involved in the investigation.

Several Ramona Gardens residents said this week that they learned of the sweep from morning news reports and that they were unsure of how much of the sweep had happened within the confines of the geographically isolated complex, bound by the 10 Freeway and an industrial zone. Many said they did not notice any unusual police activity in the complex that is regularly patrolled by LAPD officers assigned to the Community Safety Partnership (CSP). Police say that only eight of the 25 suspects arrested were found in Ramona Gardens.

The sweep “was done early in the morning and in a manner to minimize the impact on the community,” said Captain Baeza. “I’m happy to hear that the neighborhood did not feel overrun.”

A day after the raid, as Ramona Gardens residents prepared for the unveiling of a restored mural of La Virgen de Guadalupe in advance of the Día de la Guadalupana, Dec. 12, some talked about the Big Hazard sweep.

Residents of the public housing complex where officials say the criminal organization has been based, said the gang has long ago lost its grip on their community. They worry about how the neighborhood is being portrayed in news reports.

“Ramona Gardens is being stereotyped in the media as the home of the Mexican Mafia, and it’s not,” said Danny Boxer, a former gang member who has lived in the complex for most of his 59 years.

“They’re making it seem that Ramona Gardens residents don’t have liberty to come out [of their apartments],” she said.

But while on the surface things appear to be changing, some say gang activity has just become more covert. Authorities this week said there are still 350 active members of the Big Hazard gang.

“That fear and intimidation is right below the surface, and the community feels it,” said Los Angeles Police Deputy Chief Kirk Albanese.

The 110-page indictment details that Big Hazard is part of a network of Southern California Latino gangs affiliated with the Mexican Mafia, and that members and associates pay “taxes” to the prison-based gang in order to maintain control over their territory and to gain protection for Hazard members who are incarcerated.

It further claims that the indicted maintained control of a specific East L.A. territory through threats, intimidation and hate crimes against local residents and rival gangs, specifically, African American families living in the majority Latino community. The defendants are also accused of allegedly exposing and punishing potential witnesses to crimes who are suspected of cooperating with law enforcement and disrespecting Hazard, and demanding property or services from local businesses and residents.

A story published earlier this year by Boyle Heights Beat youth reporter Melissa Martinez, states that although Ramona Gardens has been known for gang activity, violence, drug dealing and racially motivated attacks, in recent years violence has dropped in the neighborhood, as it has citywide, to its lowest level in 50 years.

There has also been a history of racial tension at Ramona Gardens, where until recently black families were non-existent. After years of non-violence, black residents were targeted in a firebombing last May, bringing back memories of previous decades. The crime is still under investigation.

Community members, the Housing Authority and the Police Department have joined together and forged relationships in Ramona Gardens. Police patrols, and surveillance cameras attempt to keep the neighborhood safe.

Hollenbeck’s Baeza said he believes the takedown will have “a positive impact and improve the quality of life in the neighborhood.” He said police “will continue to work with the community so that people are not living in a shroud of fear.”

Gene García, a 72-year-old El Sereno resident who grew up in the area and walks through Ramona Gardens every day, said he was concerned when he read about Wednesday’s raid.

Kris Rivera contributed to this report.