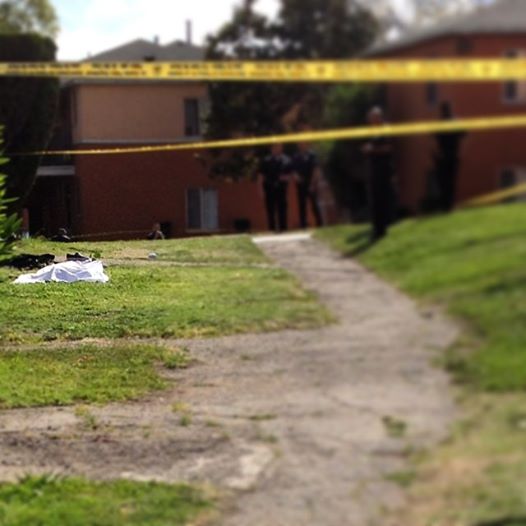 A male victim lies dead after a shooting in the Wyvernwood Garden Apartments Wednesday. Photo courtesy of Evelyn Martinez.

Detectives are investigating the death of a male victim who was shot in broad daylight Wednesday afternoon in Boyle Heights.

The incident occurred at about 3:15p.m. at the corner of 8th and Marietta streets inside the Wyvernwood Garden Apartments.

According to Los Angeles Police Department Hollenbeck Area Capt. Martin Baeza, the victim, a male in his 20s, “was visiting a young lady in the apartments when suspected gang members confronted him.”

After a verbal argument ensued, an unknown number of rounds were fired, striking the victim multiple times in the upper torso, said Baeza.

“When I saw this I felt upset at the never ending cycle of violence,” said Martinez. “I didn’t even tell my mom because she worries about me coming home late on my bike.”

The victim has not yet been identified, but according to Baeza, he was not a Wyvernwood resident.

The male was pronounced dead at the scene.

Anyone with information on the case can call call Hollenbeck homicide detectives at (213) 342-8969 or provide anonymous tips on WeTip by calling 1-800-78-CRIME, or visit www.wetip.com.