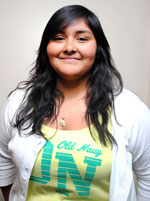 Diana Ochoa is a junior at Roosevelt High School and a former youth reporter for Boyle Heights Beat. She describes her adventure at Harvard University and the experience of documenting her life for a video series put together by Politik Media.


It was the chance of a lifetime. A little less than a year ago, I flew 3000 miles along with four other Theodore Roosevelt High students and visited Harvard University, in Boston, Massachusetts. Joining me were: Betty Sosa, Perla Gutierrez, Jorge Estrada, and Oscar Rodriguez, all of whom attended the Communications New Media and Technology (CNMT) small school. The Roosevelt High Video Project: Boyle Heights Goes to Harvard is the result of our privately-funded, one-time trip, provided by Eliza Shaffy and Omar Denis Bongo Ondimba.

The trip was designed for students to gain knowledge of schools outside of California as well as to encourage us. It was also meant to let us know that no matter where we are from, we are able to go places.

We were not chosen at random, but recommended by our teachers. The five students who made the trip were selected in the end after an interview conducted by Shaffy and Bongo Ondimba. Those who were chosen were given cameras to film their life here at Roosevelt and in Boyle Heights, as well as to show what type of people we are. At first we had no idea what to start filming, until they told us to film what we want and who we are. After filming for days, we started to get more comfortable with what we were doing.

When it was time for the trip, I couldn’t wait. My friend Betty and I started counting down the days. When it was time to leave, I was really nervous. Although I have been on a plane, I had not gone on a distant trip without a family member. That made me fell strange and scared. But by the time that I got to Boston, I forgot about those fears and just began looking at the brand new surroundings.

Being there felt great. We got to explore a new city and learned some of the background history of Harvard University. We even had a chance to take a tour of the university and to eat at a dining hall that resembles the dining hall in Harry Potter’s school. We went to a museum where we saw such amazing artifacts. We got to talk to students who are currently attending Harvard, including a Roosevelt graduate who obtained a full ride to Harvard. We also had the chance to meet Eliza Shaffy’s daughter. Knowing that these students are able to attend a university like Harvard gives me the confidence. Even though I may face obstacles, if I try hard enough, I can attend whatever college I set my heart on.