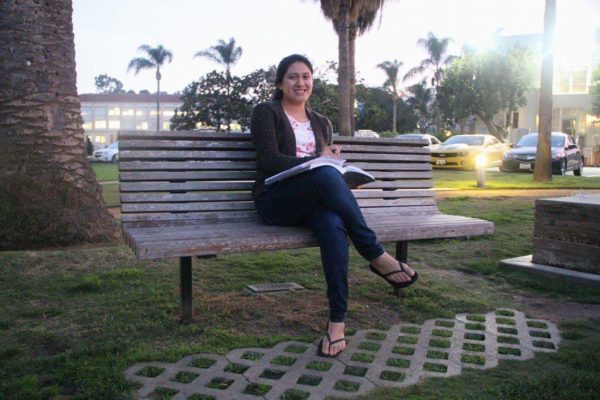 On Tuesday, I will be voting for the first time in a presidential election. I have waited two years for my chance to wear an “I Voted” sticker with pride. In 2014, when I turned 18 years old, I registered to vote.

The Pew Hispanic Center estimates that between 2012 and 2016, 3.2 million young U.S.-born Latinos came of age and turned 18, and 36 percent say they will be casting a ballot for the first time – just like me.

This election is very significant for me because my 98-year-old grandmother, who does not speak English, has urged me to vote. She often reminds me I am fortunate to be able to even read a ballot. Born in 1918, she was deprived of an education and cannot read, but has followed this election closely.

When she sees me studying at home she says, “Sigue estudiando y lee todo porque puedes. Nunca aprendí a leer, pero tú aprendiste.” (Continue studying and read everything, because you can. I never learned how to read, but you did.)

I have done everything in my ability to learn as much as possible about this upcoming election, from participating in class discussions to reading the voter guides sent in the mail. I also do this because my family members, many of whom do not read English, rely on me as a source for information and actively engage in conversation with me about how they should vote.

As a young Latina voter, I believe this a crucial moment in U.S. history because who we elect and the propositions we vote for will have a lasting impact on my future. Latino voters are an important voice in these elections because people of color are a majority of the population in California and our vote should count.

We are also facing a decision about some of the most controversial presidential candidates on a ballot, and as a voter it can be difficult to decide what is right. I feel as if I have been voting my entire life because I have the responsibility of explaining the propositions and measures on the ballot to my family and translating them from English to Spanish. This election and these issues have connected me to my roots and brought me closer to the adult members of my family as I realized just how stressful Election Day could be for them.

Voting in my household is second nature. For as long as I could remember, my aunt and uncle have gone to the polls for elections. They have set an example for me to prioritize voting despite having a busy school schedule.

This is the first time I will not be accompanying my aunt and uncle to the polling place. On Tuesday, I will be engaged in doing my own share of service at my school, by helping collect data in an exit poll for the Center for the Study of L.A., where I work, to gain a better understanding of where L.A. voters stand on the issues on the ballot. I have sent my “vote-by-mail” ballot and will be following the results closely. 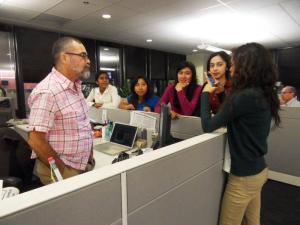 Lesly Juárez (third from the right) with other Boyle Heights Beat students during a visit to the La Opinión newsroom on the night of the Nov. 2012 presidential election.