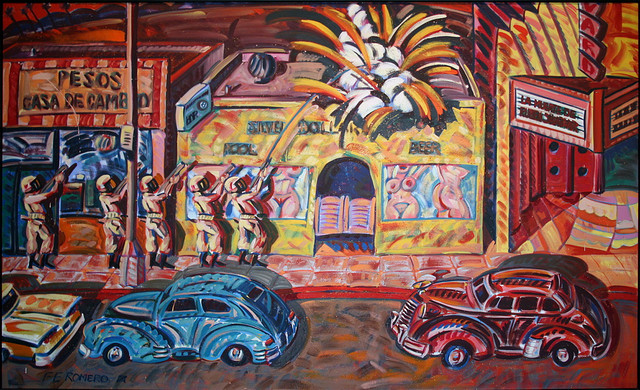 This August 29 marks the 44th anniversary of the Chicano Moratorium, and the death of Los Angeles Journalist, Ruben Salazar.

I remember that day in 1970. The world was very different then, than it is now.

A disproportionate number of Mexican-American, and other people of color were dying in Vietnam, and the country had had enough of it. Peaceful protests were being held in schools across the country, including UCLA, Stanford, and locally, at East Los Angeles College.

The moratorium was the first of its kind in Los Angeles. It was opportunity to show the world that the Chicano community could make a difference.

Taking the lead from other civil rights leaders like Dr. Martin Luther King Jr. and Cesar Chavez, the march would be a peaceful one; one that would show the solidarity of the huge community that had been viewed in the past as apathetic.

I recall that day clearly as a 14-year-old boy. I remember my older cousins and friends talking about the march in the days leading up to the event. This was going to be something special.

I rode my bike to, what was then called, Laguna Park to witness the Chicano movement on its greatest day, only to be turned away by Sheriff’s deputies who had already cordoned the area off.

Still, the electricity being generated by so many of my Mexican brothers and sisters was in the air. I had never seen so many people in one place as they filled Whittier Blvd as far as I could see.

I remember thinking if my father knew I was there he would have kicked my butt. He was a good man, but he loved this country – unconditionally. This country was great, according to my father, and I was expected to love it as well.

It mattered not that young Chicano men and boys were being taken away, many against their will, to fight, and die, in a war most did not understand.

Soon after the peaceful march commenced, the sheriffs found reason to break the party up. Reports circulating at the time claimed the owners of the Green Mill liquor store had called the department to report looting by the demonstrators, although I was a few steps away from the store that day and don’t remember seeing anything.

That’s all the sheriffs needed. They came at the crowd, dressed in full-riot gear to break up the march. Some marchers fought back and the situation quickly got out of control and eventually led to Salazar’s death.

Salazar died inside the old Silver Dollar bar near Atlantic Blvd when a sheriff’s deputy fired a tear gas cannister into the bar striking Salazar in the head, killing him instantly. Some say he was there looking for cover from the violent confrontations outside, others that he was meeting a source for his story but, in any event, he did not leave the bar alive.

Affixed on the building that was once home to the Silver Dollar is an envelope-sized plaque with Salazar’s name, birthday and the day he died, and that is all.

Salazar was an award-winning journalist who was born in Juarez and made his way to Los Angeles through El Paso to act as the voice of the voiceless community.

He was honored by having Laguna Park renamed Ruben Salazar Park in 1970, and this August 29, a celebration of his life will take place on the park’s grounds.

The event will include a ceremony and the unveiling of a commemorative plaque, followed by a documentary film about his short life inside the gymnasium.