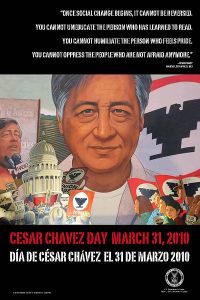 I was seven years old and in the 4th grade when I first learned of César Chávez. I hadn’t known of any Mexican Americans who had changed the world until then.

My teacher, Ms. Iniguez-Gomez, was part of a teachers union and thought it was important to share the tradition that had long existed in our history as Xicanas/os, Latinas/os living in the United States. It was then when I learned what it meant to be a Native American and a Xicano.

The recent film on César Chávez, directed by Diego Luna and starring Michael Peña, is a good start to educating the masses about a person who served a community of marginalized, mistreated, Mexican American farmer workers””who, to Chávez, deserved justice, fair wages and respect.

The film starts with an interview where Chavéz explains how and why he began to organize and why he and his family moved to Delano, California. The first shots depict Chávez as an influencer in the farm worker movement, but the film goes on to show a movement somewhat independent of him. You can see that when Chávez is lying on his bed after several days of fasting and farm workers continue to mobilize the efforts of the United Farm Workers.

The UFW organizer born and raised in Yuma, Arizona was indeed an imperfect human. The characters in the film brought me closer to Chávez””showing me his imperfections, while at the same time his strong belief in nonviolent organizing. Throughout the film there are very few shots of him with his family, especially his kids. His eldest son, who he calls “Poli,” gets beat up and called racial slurs at school. When Chavez sits down with Police to discuss the situation, his son walks away. “I knew you wouldn’t understand,” Poli tells his father. Later in the film, Poli moves out, he grows older, and receives a letter from his dad apologizing for his absence in his life.

Though Chávez was a man whose Catholic beliefs informed his ideas of justice, the film didn’t portray that at all. Instead, we look at a film that nearly secularizes him in his rhetoric but uses Catholic and indigenous mixed symbolism such as Our Lady of Guadalupe in the film.

After seeing his fellow union members resort to violence, Chavez calls out the violence and begins a fast. His nonviolence beliefs are strongly characterized by his fast.

One of the most powerful scenes in the movie was not when Chavez was shown as a strong, willful man delivering inspiring speeches to propel his movement. The strongest scenes happened when Chavez was at his weakest point. In that moment, when his body was debilitated and mind disoriented because of fasting, is when his spirit and love for the farm workers is shown.

Michael Peña does an excellent job of embodying and acting out the values, goodwill and sacrifice of the UFW organizer, César Chávez.