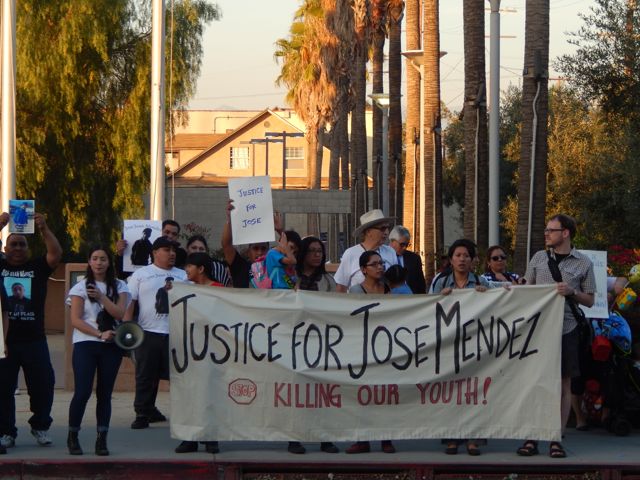 Juan Méndez said he found out that his 16-year-old son had been shot and killed by police when detectives called him at work.

“They said it was a shooting and left a detective’s phone number, and that’s it,” said the father of José Méndez, the teen who was killed in a February 6 officer-involved shooting that is under investigation.

Méndez, a 48-year-old immigrant from Mexico City, said he met with detectives who took only two minutes to detail how his son was killed,  and that he did not get a satisfactory explanation. He said that an eyewitness told him the boy was shot six times and that police officers dragged his body several feet away from where he fell. The elder Méndez has yet to see his son’s body. 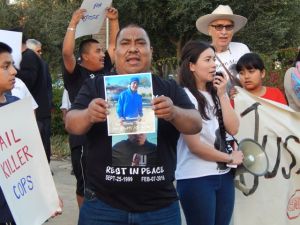 Juan Méndez shows a picture of his son José Méndez, who was killed in an officer-involved shooting on Feb. 6, 2016.

“I am here to demand justice, so that this doesn’t happen to another child,” Méndez said in Spanish at a rally held Friday evening in front of the LAPD Hollenbeck station. “I want justice and I want this clarified.”

Police say the night of the shooting José Méndez was driving a stolen vehicle and was stopped by police near the intersection of 6th and Lorena Streets. “The young man did have a sawed-off shotgun and pointed it at the officers, and an officer-involved shooting did occur,” said LAPD Captain Martín Baeza, commanding officer at Hollenbeck.

Baeza said he could not confirm the number of officers involved in the shooting or how many shots were fired at the 16-year-old, because those details were part of the investigation. He added that the incident would be thoroughly reviewed by the LAPD’s use of force investigation unit and that a review board would determine if the officers acted within policy.

But Baeza said the shooting of José Méndez had to be looked in the context of a marked increase in violent crime in Boyle Heights, and pointed to a gang-related shooting the same weekend that took the life of two teens. 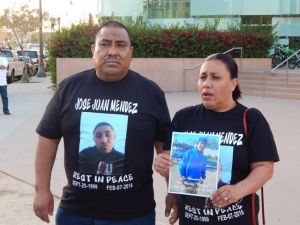 “The violence that we have seen recently here has contributed to a lot of fear in the community,” Baeza said. “I think that what we need to do is to work together in order to reduce that violence and not just focus on one incident, but on what is attracting children to this violent lifestyle of carrying shotguns and stealing cars and being involved in gangs. That, I think, is the bigger story. That’s the bigger issue.”

As Baeza spoke inside the Hollenbeck station, about 50 community residents and activists accompanied Juan Méndez and his wife Josefina Rizo outside, calling out for justice and an end to police killings. Volunteers also collected donations to help the family with funeral expenses.

“When one of our own is attacked and gunned down, especially when he is 16, we have to stand up and unite as a community to fight against these attacks,” said Sol Márquez, a member of Centro CSO, a community group that organized the rally. 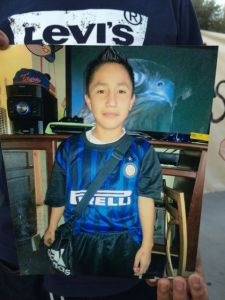 A family member holds an undated picture of José Méndez in football gear.

Standing close to his wife and 9-year-old son, Juan Méndez recalled fond memories of José, the seventh of his nine children.

“He was active and he was fascinated by fútbol,” Méndez said, admitting that his son liked to hang out in the streets and would sometimes get in trouble. “But he never robbed or assaulted anyone,” he said.

Because the boy had been in trouble with the law, Méndez said his son had been placed in a group home in Chatsworth, from which he escaped on January 3. He said probation officers visited him at his home and told him that if he did not return to the placement facility, they would issue an order for his arrest. Méndez said his son was afraid and went into hiding.

“He wasn’t sleeping at home, he fled, and I didn’t hear from him until the Sunday [the day after the shooting], when they called me at work,” he recalled.

He said he’s been told his son’s body will be handed over to him on Feb. 20, and that a funeral will be held on that day at his home near Olympic and Indiana. He and his family will join volunteers this weekend in a car wash to raise funds for the burial.

“All I want is for the police to tell me what happened,” he said.

The carwash to raise funds for José Mendez’s funeral will take place Saturday, Feb. 13, beginning at 10:00 a.m. at the corner of Olympic and Prado.

Watch a video of Juan Méndez speaking at Friday’s rally: