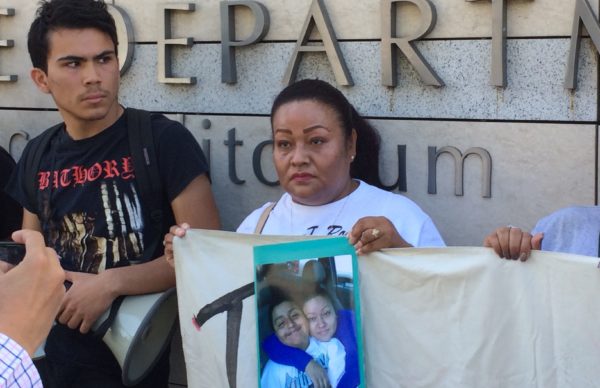 The family of the Boyle Heights 14-year-old boy shot and killed by police last year have filed a wrongful death suit against the city and the officer involved in the shooting.

According to news reports, the lawsuit was announced Friday at a press conference downtown attended by the teen’s parents, Teresa Domínguez and Jesús Romero García, and their attorney Humberto Guízar.

Jesse Romero was shot in the late afternoon of August 9, 2016, near the corner of César Chávez Avenue and Breed Street. According to police, officers responded to a vandalism call and found Romero and two others tagging gang graffiti on César Chávez and Chicago Street. As police approached them, they fled.

Police said they saw Romero running and  “grabbing his front waistband” as he turned onto Breed Street. As officers approached Romero, they heard a gunshot and saw Romero fire a handgun at the officer. Police said that one of the officers saw the teen “crouched on the sidewalk with his right arm extended toward the officer.”

That officer –later identified as Eden Medina– then shot Romero. The teen was declared dead at the scene.

Since then, at least one witness has said that Romero did not shoot at officers but rather threw his handgun against a fence, where it went off accidentally. A video obtained by the family shows police picking up the handgun several feet away from where Romero was shot and on the other side of that fence.

According to the lawsuit, the teen was shot in the back “in a cold calculated manner” as he was running away from officers and after he threw his gun over the fence.

“By not disciplining police officers when they use excessive force, [the city has] fostered a culture of allowing officers to shoot people and get away with it,” said Guízar, the family’s attorney, according to the Los Angeles Times.

Medina, the officer named in the lawsuit, had shot and killed a man in Boyle Heights 12 days before he fatally shot Romero. Police said the officer returned to the force six days after the July 28 fatal shooting of 36-year-old Omar González, following a routine psychological evaluation.

In the lawsuit, the family said Medina should not have been allowed to return to the field so soon after the first fatal shooting.

In October, the family and the lawyer filed a claim against the city –a preliminary step to the wrongfu death lawsuit that went unanswered.

Jesse Romero’s killing sparked protests in Boyle Heights and parts of an altar raised in his memory on Breed Street, where he was shot, are still in place. Romero was the fifth person and the second teen killed in an officer-involved shooting in 2016 in Boyle Heights.

In January, the family of José Méndez –killed in February 2016– filed a lawsuit against the city and the LAPD, seeking to “establish the true and unequivocal facts” surrounding their son’s death.

Photo above: Teresa Domínguez shows a picture of her son Jesse James Romero at a downtown LA rally on October 6, 2016.