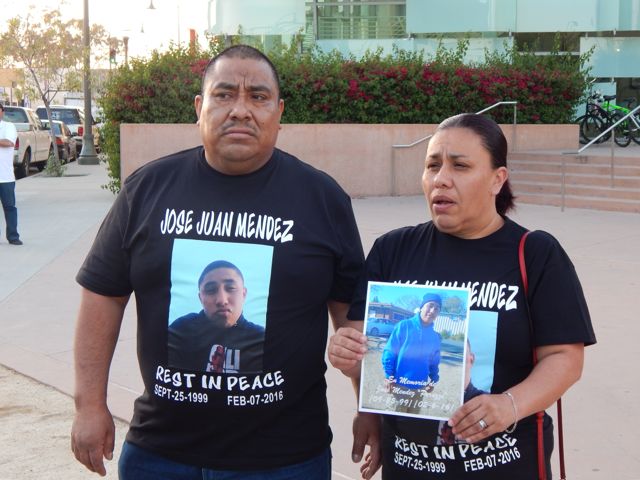 The family of a 16-year-old Boyle Heights teen shot to death by police in early 2016 said it is suing the city and the LAPD a day after the department said the officers involved acted within policy.

Various news outlets reported that the family of José Méndez announced the lawsuit Wednesday at the Long Beach office of attorney Arnoldo Casillas. According to the LA Weekly, the suit seeks to “establish the true and unequivocal facts surrounding the shooting and killing of José Méndez.”

The lawsuit names the two officers who shot the teen as Josué Mérida and Jeremy Wagner.

José Méndez was shot on the night of February 6 after police stopped him driving a stolen vehicle on 6th Street near Lorena Street. Police say the teen pointed a shotgun at two approaching officers who then opened fire.

The LAPD say officers recovered a sawed-off shotgun at the scene. But the Méndez family say the teen did not pose a threat to the officers and that a video from the scene –that shows officers dragging the teen’s body after he was shot– contradicts at least part of the department’s account.

“Brandishing doesn’t get you shot”, family attorney Casillas told KABC. “It shouldn’t get you shot. What we know is that José in his conduct did not demonstrate anything that suggested that he was a threat.”

In a lengthy interview with the Boyle Heights Beat last summer the teen’s parents –Juan Méndez and Josefina Rizo– spoke about their son’s passion for football and how his behavior changed when he started using drugs about a year before he was killed.

On Tuesday, LAPD Chief Charlie Beck presented his report on the Méndez shooting before the Los Angeles Police Commission. A redacted version of the report made public on Wednesday shows that the chief found some fault in how the two officers and two sergeants handled the incident.

The report said they failed to communicate with each other in advance and failed to wait for backup before acting. It also said, according to The Los Angeles Times, that neither officer activated his body camera before the shooting.

According to KABC, the report says that they “substantially and unjustifiably deviated from approved Department tactical training, thus requiring a finding of Administrative Disapproval.” Nevertheless, the Police Commission determined that the two officers were justified in using deadly force against the teen.

Méndez was one of two teens killed by LAPD in Boyle Heights last year. In August, officers fatally shot 14-year-old Jesse Romero. Out of 19 LAPD involved shootings that ended in fatalities in 2016, five happened in Boyle Heights.

Editors note: This post was edited on Jan. 12 to reflect that neither officer involved in the shooting had their body camera on, and that the Police Commission found the shooting justified.