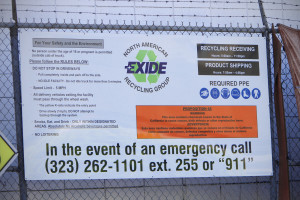 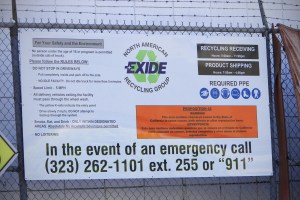 The Exide plant in Vernon, Calif. has reached an agreement to shut down. Photo by Art Torres

In a victory for residents and environmental activists, Exide Technologies will permanently shut its doors in an agreement reached late Wednesday night with the U.S Attorney’s Office.

The controversial battery recycling plant in Vernon has a history of violating air pollution and hazard waste laws. Local residents have been demanding its closure since a 2013 study by the South Coast Air Quality Management District revealed a significantly increased cancer risk for more than 100,000 people living and working near the plant, including Boyle Heights.

According to the agreement, Exide will admit to the illegal storage and transportation of hazardous materials, but will not face criminal charges if it shuts down, demolishes and cleans up its facility.

“Exide’s actions and criminal activity should serve as a warning to state regulators to do a much better job in the future. While Exide’s closing is welcome news, our communities deserve nothing less than a full cleanup of the toxic mess this company has made, “ said L.A. City Councilman Jose Huizar.

As part of the agreement, Exide will be bound by a previous agreement with state regulators to set aside $38.6 million for closure and clean up of the facility, and $9 million to clean lead-tainted soil from hundreds of surrounding homes.

The Department of Toxic Substances Control is overseeing the cleanup. “DTSC will use every tool and legal mechanism at its disposal to ensure Exide’s remaining resources are used properly to close the facility and clean up contamination in the residential area, “ said DTSC Director Barbara Lee in a press release.

The second phase of yard clean ups began in December as crews began removing contaminated soil from two yards in Boyle Heights. The concentration of lead in the soil could cause a risk to young children and pregnant women.

In a released statement, Exide officials said they expect to be able to meet its closure and cleanup obligations, emerge from bankruptcy and preserve nearly 10,000 jobs globally.

“We recognize the impacts that closing the Vernon facility will have on our approximately 130 employees and their families,” said Robert M. Caruso, president and chief executive of Exide Technologies.

Just last week, hundreds of protestors rallied at a South Coast Air Quality Management meeting, demanding Exide’s closure. The news comes as a relief for many in Boyle Heights, where community members have continued efforts to shut down the facility.

“[This news] is historic and I hope this sends a message to serial polluters in the state of California that justice is sometimes slow, but it will get you,” said Msgr. John Moretta of Resurrection Catholic Church, who in 2013 testified in hearings about the affects of Exide’s pollution on his parishioners.

The facility, which, when operational, recycled up to 25,000 batteries daily, had been operating with a temporary permit for decades. After numerous citations for environmental violations, it was forced to close for the past year because it could not comply with stricter air quality standards.

If Exide violates terms of the agreement, it could face criminal charges.

This story was updated at 10 a.m. to reflect statements and at 1:30p.m. for additional details.