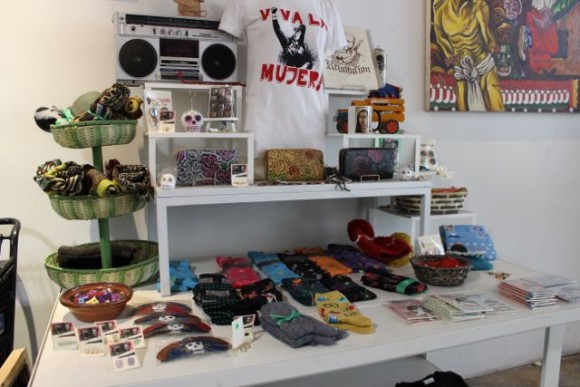 [portfolio_slideshow id=3353]
When you first walk into Espacio 1839, you don’t know what you’re walking into. Its white walls and open spaces remind you of an art gallery, while splashes of color from children’s books, Chicano crafts and apparel with a Boyle Heights’ logo draw you in.

Looking more like a museum space than a retail store, Espacio 1839 is the result of a collaboration that brings together multiple artistic and creative talents.

Last year, multimedia journalist Marco Amador, 37, came together with three other Eastside entrepreneurs who wanted to build a collective for the community: Nico Avina, an artist; Elisa García, a former bookstore owner; and David Gómez, a disc jockey.

“The inspiration was to create a core of a group of people that were thinking about media and about creating spaces,” says Amador. “I felt our community needed a space to really feel comfortable within the environment.”

Natives of East Side communities like Boyle Heights, El Sereno and Highland Park, the four friends saw Espacio 1839 as an opportunity to express their individual creative passions while highlighting the community’s cultural richness and social activism through art, books, fashion and music.

Many of the products sold at Espacio 1839 are created or curated by the founders, as well as local artists who are trying to spread a common message about social justice and political and social movements.

Examples of Chicano and Latin American culture are displayed throughout, with Lotería-influenced art, biographies of revolutionary leaders, and vintage Cuban salsa and punk rock records.

“No other store has what they have,” says Boyle Heights resident Rosemary Chaparro, who found the store while visiting the Farmers Market in Mariachi Plaza and now comes three times a month.

“I like the variety of clothes, the drawings, the paintings and the culture. And I like that it’s in this area, because it’s close to my home,” says Chaparro, who frequently buys books there for her daughter.

Boyle Heights resident Enrique Arozqueta went to Espacio 1839 looking for apparel with a Boyle Heights logo. “Espacio caters to clothing lines that I like, that represent the community,” says Arozqueta.

Espacio 1839‘s clothes evoke the many cultural influences in Boyle heights. Every outfit created by artists in Espacio shows the cultural and Chicano pride of Boyle Heights.

“If it is cultural pride, then you’re wearing that cultural pride on your chest, because you’re not embarrassed. You actually have the knowledge of self, and you are aware of who you are and where you come from,” says Avina.

Espacio 1839, which celebrated its first anniversary in October, is located on First Street, next to Mariachi Plaza and in the middle of a flourishing arts district. The store’s clean faÃ§ade stands out among the neighboring taco restaurants and bars.

“Independent media centers don’t exist in a lot of our communities, but they exist in other communities. Historically, these kinds of resources are denied in our community,” says Amador.