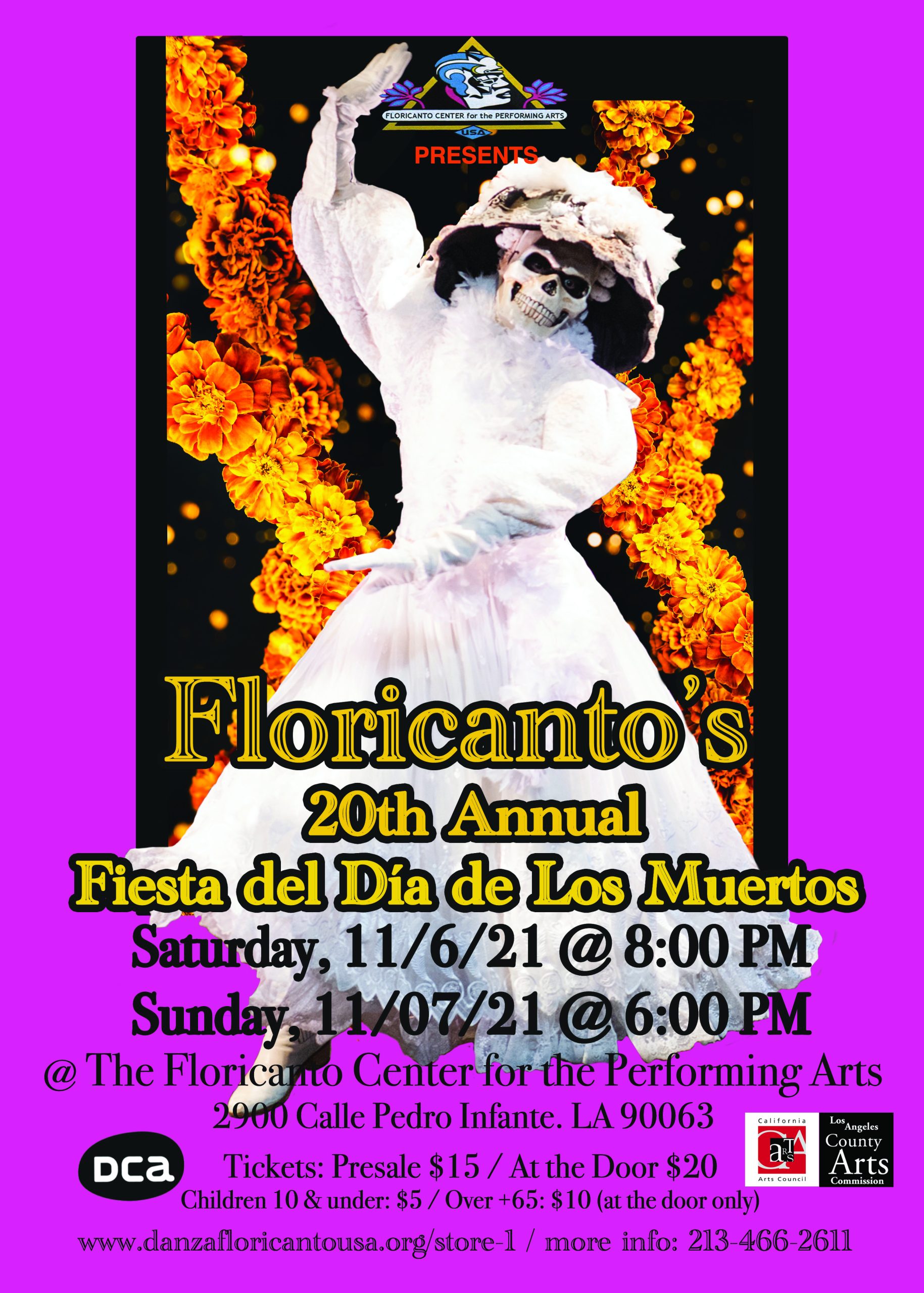 Returning to full live performance after 16 months, Floricanto Dance Theatre/aka Danza Floricanto/USA will be presenting its annual Fiesta del Dia de Los Muertos program on Saturday November 6th at 8:00 pm and 6pm on Sunday, November 7th. Pertinent netherworlds will be transformed into a local cemetery by Danza Floricanto/USA to commemorate their 20th Annual “Fiesta del Día de los Muertos,” through a series of vignettes that celebrate and honor this very traditional Holiday, Chicano style. The company, under the direction of Gema Sandoval, will tackle a series of social issues (love, death, teen pregnancy, immigration among others) with humor and respect. Now on its twentienth year, “Fiesta Del Día De Los Muertos” has become an annual Floricanto tradition. You now have many choices on how to commemorate this celebration of life. Our Fiesta Del Dia de los Muertos program continues to be intimate, family oriented and affordable.

The Day of the Dead is celebrated in communities throughout South America on November 1 and 2, when families and loved ones traditionally visit their santos difuntos (blessed dead ones), praying for them while they clean their tombs and bring them gifts of what in life had been their favorite foods, drinks, and flowers. It is a manifestation of respect; a way to let the departed know they are still remembered, celebrate them and ask them to intercede with particularly worrisome earthly problems. A series of characters who live in the Cemetery will tell their stories and share their concerns through dance. The evening’s guide will be the famous skeleton known as “La Catrina,” first conceived by early 20th-century Mexican graphic artist José Guadalupe Posada, and made famous in the murals of Diego Rivera. Floricanto’s “Catrina” is an homage to the Latino community’s spirit of resilience and survival. Danza Floricanto/USA’s Fiesta del Dia de Los Muertos takes its inspiration from the very traditional Day of the Dead activities in Mexico-altar offerings of favorite foods and flowers honoring our dead, processions to the grave sites, songs and candles, sugar skulls, skeleton dioramas, and paper cuttings-then giving it a contemporary flavor, designed to entertain, delight and honor the whole family.