Tenants of a group of buildings on the 2400 block of East 1st Street that are being demolished this month will have a guaranteed home in a 50-unit affordable housing project being built there, activists announced this month.

The Unión de Vecinos, a local advocacy group that organized the renters, said it has reached an agreement with the East LA Community Corporation (ELACC), the nonprofit developer of the Cielito Lindo complex near the Northeast corner of 1st and Soto.

The agreement will benefit nearly 50 residents at 17 units being demolished as part of the first of two phases of construction of Cielito Lindo. Several of them joined a protest in September, demanding a guaranteed home in the new development. ELACC had offered the displaced tenants a first right of refusal for the Cielito Lindo apartments, but they would still have to go through an application process and meet Federal guidelines for affordable housing.

Under the agreement, tenants who want to return once the complex is built will be guaranteed an apartment without having their credit checked or meeting a minimum income requirement. 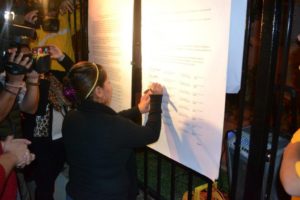 The agreement was signed by various tenants.

The agreement was announced and signed by the developers and the tenants at a public celebration held Dec. 1 on the development site

“For 20 years ELACC has been working with Boyle Heights’ low-income residents on setting a model for development without displacement,” ELACC president  Isela Gracián said in a statement.  “Today we celebrate another example of us working together with tenants to continue setting the example for quality affordable housing through a community-driven process for Boyle Heights.”

Elizabeth Blaney, co-director of Unión de Vecinos, said the agreement was reached after several meetings between ELACC and the tenants.

“We are happy that East LA Community Corporation worked with us and the tenants to help reduce the displacement occurring in Boyle Heights,” said Blaney, who hopes other Boyle Heights developers will sign a similar agreement. “The right of return agreement can be a model for other developers to help reduce the displacement caused by the construction of new affordable housing.”

The first phase of Cielito Lindo —which is being built on parcels owned by ELACC– is expected to be completed and occupied in the Summer of 2017. A second phase, which will add 31 units to the complex, will displace eight additional tenants who are not covered under the current agreement.

All tenants displaced for the first phase will still receive a relocation package mandated by law and worth at least $19,500, which they will not have to return if they decide to move back to Cielito Lindo.

Photo above: ELACC president Isela Gracián speaks at the celebration, surrounded by several of the tenants. Photos courtesy of ELACC.