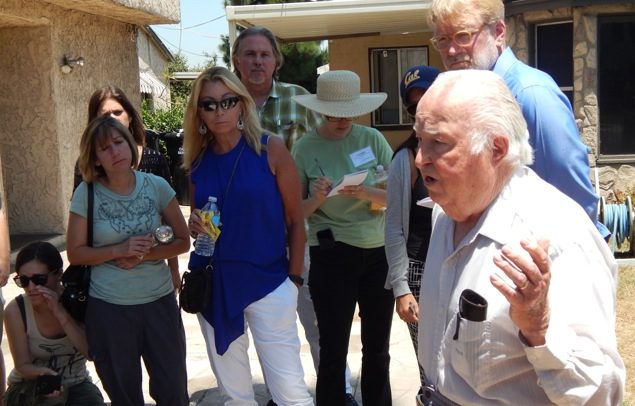 On a hot, cloudless July morning, Jill Johnston was busy poking around the front yard of 87-year-old Bob Eula with a shockingly expensive hand-held X-ray machine whose beam detects levels of lead and other toxins in the soil.

Johnston, a professor of preventative medicine at USC, found her suspicions confirmed in a bald strip of dirt along the sidewalk: a lead reading of 1,300 parts per million, well above California’s hazardous waste threshold of 1,000 parts per million. 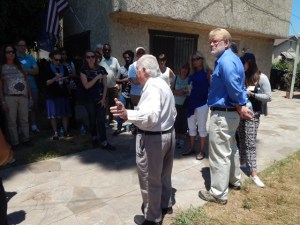 abuts one of the world’s largest rail yards, on a street that dead ends at the eight-lane 710 freeway, in a house that rests a little over a mile from the now-defunct Exide battery recycling plant, the epicenter of a decades-long public health disaster that has left thousands of properties contaminated and scores of residents poisoned in surrounding neighborhoods.

Eula, the mayor of Commerce during the 1970s and early ’80s, made his feelings on Exide clear. “You don’t stop fighting until the soil is clean, and the company is gone,” he said. “Put ’em in the desert someplace.”

While Los Angeles communities such as Bell, Commerce, Maywood and Boyle Heights won a hard-fought victory when the Department of Justice shut down Exide in 2014, the crisis isn’t over. The extent to which children in the area have been poisoned by Exide’s smelting of thousands of batteries a day is still being assessed, and a massively complex cleanup is just getting underway. The scale is daunting, with about 10,000 homes and 50,000 residents lying within a 1.7-mile radius of the plant, even as some call for that number to be expanded further to 4.5 miles (and some want it to be 45 miles). So far, about 2,000 homes have been tested and 200 properties near the plant cleaned. The state legislature approved $176 million this spring to start the cleanup, but state officials peg the actual cost at closer to $500 million.

Many residents feel stuck in limbo. On the other side of the 710 freeway from Eula’s cul-de-sac, Commerce resident Nicolasa Ramírez stood on the steps of the bright-blue home where she has lived since immigrating from Mexico in 1970 and told reporters that she has stopped growing vegetables in her small front yard since earlier testing revealed elevated lead levels. Ripening apples still hang from her tree, but Ramirez is afraid to eat them. Her granddaughter, who grew up visiting the home, was three years old when she developed a cancerous tumor, which Ramírez doesn’t view as a coincidence. While she worries about the toxicity of her home, she says she can’t afford to move. Her property is on a cleanup list, but it’s unclear when that might happen. Meanwhile, she tends a few tomatoes in a tub full of soil purchased from the local nursery.

As Ramirez spoke of her predicament, USC’s Johnston did an impromptu survey with her lead gun and picked up readings far lower than those in Eula’s front yard. Yet it doesn’t mean that Ramirez’ yard poses no health threat. Dr. Bruce Lanphear, a professor of health sciences at Simon Fraser University in Vancouver and a leading expert on the effects of lead on children, told fellows later that day, “Low-level exposures can make a huge difference.”

An analysis released by the California Department of Public Health in April reported that about 3.6 percent of kids who live within a mile of the former plant had elevated levels of lead in their blood. Johnston has sought to obtain the data directly from the state to look for patterns in blood lead levels and potentially guide cleanup efforts, but she says the state has refused to share even redacted data, citing privacy restrictions. She’s now working with another researcher to analyze baby teeth to see how residents’ exposures to lead and other toxins changed over time, since budding teeth encode a record of their environment, much like a tree’s rings.

For now, Ramirez and her neighbors are stuck in a holding pattern. California’s Dept. of Toxic Substances Control, the agency roundly criticized for failing to enforce regulations at Exide in recent decades, admits that the remediation effort is “poised to be the most extensive cleanup of its kind in California.” While state funds have been set aside to clean about 2,500 homes, the public review process currently underway means that further cleanup of homes will be pushed back until at least next spring, according to the department. And there’s the question of cleaning up the intensely polluted Exide site itself.

“People have been working really hard to make sure the remediation is done well, but that is still an ongoing process,” Johnston said.

“We call it our little Chernobyl over here.”