“The B the H yo Boyle Heights meet your face, where hip hop explodes while the hipsters invade.”

It started with an idea inside the mind of Mickey Miranda, better known as Viva Mescal. Back in 2012, like all dreams begin, Mickey had a vision and his vision required taking the road less traveled. Getting over naysayers, doubters and those telling him that it was next to impossible to make a living from music, Mescal kept pushing forward and didn’t let the negative energy of others persuade him to stop. 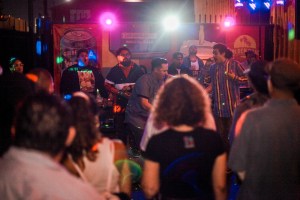 Viva Mescal on the mic, performing.

Viva Mescal got his start performing his rhymes in front of locals, at a place known so fittingly as Corazon Del Pueblo – a small creative space, now defunct and sitting silently on First St. in Boyle Heights. Using social media platforms such as Facebook and Instagram, Mescal caught a local buzz, which proved to be just the beginning.

As passion for the music grew, Mescal expanded performing at local shows all over the city. Through these performances he met others and decided to form a collective known as East of the River. As the years passed, artists such as Mad Macks, Don’t Sleep, L.A. Rhymes, Killa Teck, Soul Providers, Hollow Visions, Kiddo and Zzay have joined the collective providing both rhymes and vocals to already powerful music.

Issues such as politics, struggle, gender inequality and the hustle and bustle of life provide a glimpse into the ever-changing dynamics of a city once referred to as the “Ellis Island of the West.” Recently gentrification has been a hot issue, with neighborhood locals protesting in front of art galleries and coffee shops, pushing back against the threat of rising housing costs to this working class community. Through the music, many of these issues are brought to light and tackled with superb penmanship –and beats to match– that will have fans both thinking deep and bobbing their heads at the same time.
The idea of the collective is to provide music that changes the perception of Latino hip hop, from just Chicano rap to something completely new and different than what was known to come out of the Eastside barrios of Los Angeles. In his song “Heaven Behold”, Viva Mescal depicts exactly that as he writes: “This the mural on the wall/ I’m deeper than the people I draw/ results from the past are past put the future on super strong/ lyrical pick me up at no surcharge turn your Uber off.” 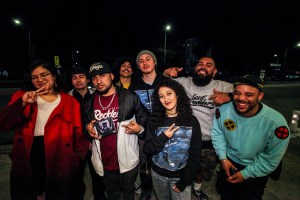 East of the River (EOTR) Collective

The perception, not just locally but nationally, has been that Latino emcees from LA’s Eastside glorify violence, degrade women and promote drugs and crime, which is merely a token of the area’s tumultuous past. East of the River has two resident female emcees in Kiddo and Zzay, who spotlight women’s struggles not just within hip hop itself, but also in society as a whole.

On her song “Buy In,” Kiddo describes the struggle of being treated as less, and her powerful reaction to it provides proof that a woman can create and hold her own within a male dominated genre: “1-2 check/ first off forget/ anyone who want to judge me for my sex/ like I don’t pay dues/ and I don’t pay rent/ and I don’t write my own rhymes and make my own connects.”

Zzay, on the other hand, adds melody to her lyrics as she declares in “Wilted”: “I don’t need you around to be stressing me out/ I can do that on my own.”

After a couple of years of ups and downs and doing local shows, East of the River artists Mad Macks and Viva Mescal had a chance encounter with famed LA artist MURS, who was introduced to their music and instantly became a fan. MURS played their music on his podcast and invited the group to perform on his Paid Dues Concert, which was cancelled due to health issues with headliner Lil Wayne. Although Paid Dues didn’t pan out, the group was invited to open for MURS at the release party for his new album “A Strange Journey into the Unimaginable” at the Roxy Theater in March. 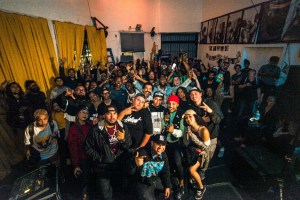 EOTR Collective with fans after performance.

Apart from MURS, the group has also connected with Boyle Heights native and winner of the Last Comic Standing, Felipe Esparza. The comedian reached out and invited East of the River to be his opening act for four performances in March at the NOVO in downtown Los Angeles. East of the River was also invited to perform on the fourth annual “Night on Broadway” which took place in January and was put together by councilmember José Huízar.

Beyond the music, East of the River has held charitable events for various Boys and Girls Clubs. Every year during Christmas, the group throws a toy drive and performs a live show free of charge. The event helps those less fortunate who would otherwise have no Christmas, receive a toy and not feel excluded because of financial burdens.

The event has been successful for five years and has even been recognized by the City of Los Angeles. “The [toy drive] started from a friend named Maria Moreno who was one of the directors at the Wabash Boys and Girls club in Boyle Heights,” Mescal explains. “I got involved because she asked for help; she said ‘could you do it?’ I asked myself, ‘can I?,’ and the answer was ‘yes.’ I felt responsible as someone from the community to put my actions into what my words were speaking about.” 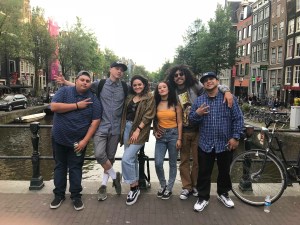 Besides the toy drive, East of the River members also works with local organizations to mentor others who are looking for a pathway to music. Whether it be providing creative tips or teaching basics in sound engineering, East of the River has become a local staple of the neighborhood.

Although the present and the future seem bright, this collection of artists do not forget where they come from. A group of over eight members –which hasn’t been heard of since hip-hop’s royal family, known as Wu-Tang, East of the River provides a stark contrast to what is stereotypically perceived of the Eastside.

Even if gang activity remains (not as persistently) and the writings on the wall continue, Boyle Heights is still a close-knit community made up of working class families. Even if bad seeds due exist among the innocent, the city breathes life into the lungs of a boisterous youth and an aging but profound culture. 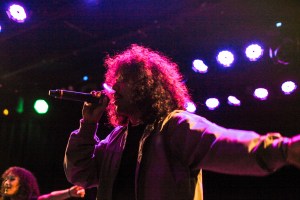 The new meets the old and carries the lessons and history of its predecessors with pride, yet it looks to leave its own mark on the city’s history. Los Angeles epitomizes entertainment with Hollywood actors and countless musicians walking the streets of the Westside, but there is a whole other part of Los Angeles that is hardly recognized.

In a place where low riders once drove and the neighborhood fights to keep its identity, a new movement arises and prepares to show the world that there is another side to Los Angeles, just East of the River.

Listen to an interview with Kiddo, a member of EOTR, on this #RadioPulso podcast: