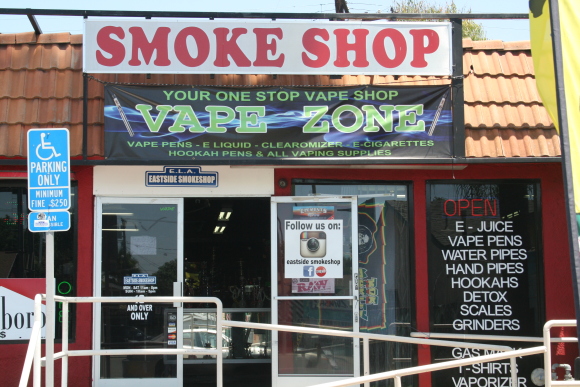 In a raspy voice almost too distorted to understand, the woman on the television screen presses her fingers against an open hole in her throat and talks about how she gets ready for her day.

She adjusts her false teeth, puts on a wig and inserts a talking device into the hole in her throat. A photo shows her as a healthy young woman and notes that she used to be a smoker.

It was graphic commercials like these from the Centers for Disease Control and Prevention that showed the dangers of smoking cigarettes. As public opinion about smoking changed, the consumption of tobacco products declined for many years, starting in the mid-1960s. But smoking is now making a comeback, this time through electronic smoking devices.

Electronic smoking devices can be battery-powered cigarettes or pen-like pipes called “vapes.” E-cigarettes are shaped like traditional cigarettes and deliver nicotine derived from tobacco, but without smoke.

Vapes are longer and look more like pens. They can be used with or without nicotine. Cartridges hold liquid that comes in many different flavors, including piña colada, red velvet and cotton candy. The liquid is vaporized when it is smoked.

These new devices are changing the way nicotine is consumed and how the public views smoking. While supporters claim they are safer than cigarettes and can be used to help quit smoking, opponents are concerned that they are attracting new young users. Research on potential long-term effects, as well as federal regulations, lags behind their popularity.

E-cigarettes first hit the U.S. market in 2007, and use of the devices has grown rapidly over the past few years. There are now more than 450 different disposable and non-disposable kinds of electronic smoking devices sold in shops all over the country.Bloomberg estimates that the market for electronic smoking devices reached $1.5 billion this year, up from $300 million in 2012. Some analysts are predicting that sales of e-cigs will surpass tobacco products, an $80 billion market, by 2047.

East LA Smoke shop on César Chávez Avenue has carried these devices for two of the three years the shop has been in business. The devices have become about 30 percent of their business. The back section of the shop is dedicated to vaping products. 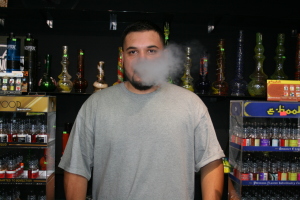 Rodolfo Bolívar, an employee at his family’s smoke shop, says vaping has become very popular among all ages. “The older people, the people who have been smoking, are using it to quit cigarettes,” says the 22-year-old. “The younger crowd is doing it as a hobby.”

According to a National Youth Tobacco Survey cited by Time Magazine in September 2013, the percentage of tweens and teens who tried e-cigarettes more than doubled to 6.8 percent in 2012 from 3.3 percent in 2011.

The relatively low cost may contribute to the popularity of e-cigarettes with young people. After the initial purchase of a starter kit, which costs approximately $30, Bolívar says the liquid runs about 30 percent less than cigarettes.

Filiberto Rivera, a 30-year-old customer of East LA Smoke, said he used to go through two cigarette packs a day and that vaping helped him quit. He started using a vape because he was tired of his three kids smelling the smoke of regular cigarettes on his clothes.

After two years of using the device, Rivera says he has lowered his nicotine consumption. “Hopefully I will just stop,” he says.

Although studies suggest that the short-term side effects of e-cigarettes are less harmful than regular cigarettes, some experts say e-cigarettes are not a safe alternative. “At this time, the American Cancer Society is not recommending someone use [electronic cigarettes] to stop smoking,” says Tom Glynn, the society’s director of science and trends.

Glynn says better methods include nicotine replacers such as nicotine patches, gum or lozenges and prescription nasal sprays or inhalers.

The concern, he says, is “ we don’t know is what the long term effects are, because they haven’t been around long around enough for us to be able to look at.” He says one of the unknowns is the effect on health from daily inhalations of the main ingredient, propylene glycol, a chemical found in products like fat-free sour cream and antifreeze.

A policy statement released in August by the American Heart Association recommends that physicians allow patients to use e-cigarettes as part of a tobacco-cessation program when repeated efforts with conventional treatment fail. But the group also “calls for strong new regulations to prevent access, sales and marketing of e-cigarettes to youth, and for more research into the product’s health impact.”

Los Angeles is among several U.S cities that have recently banned the use of electronic smoking devices in public spaces. But the Smoke Free Alternative Trade Association, which represents manufacturers and distributors of electronic devices, claims that these products do not raise the same safety issues as tobacco products and should not be regulated as such. 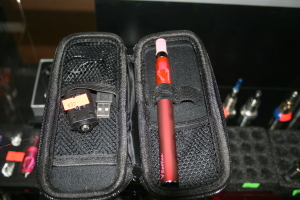 There are more than 450 types of electronic smoking devices in the market. Photo by Brizette Castellanos.

Research has shown that nicotine is addictive and can affect brain development in adolescents.

Glynn says the American Cancer Society fears that the electronic devices may make smoking seem normal again at a time when only 15.7 percent of U.S. teenagers light up. It’s “the lowest it’s been since the late 1970s, so what we don’t want to do is have any backsliding.”

According to the Tobacco Vapor Electronic Cigarette Association, there are now more than 3.5 million e-cigarette users in the United States.

One of them is Anahi Partera, a 19-year-old vape user who tried cigarettes, but never became a habitual smoker, and now prefers the electronic alternative.

“I like the feeling of it and [that] you can choose different flavors,” she says.”