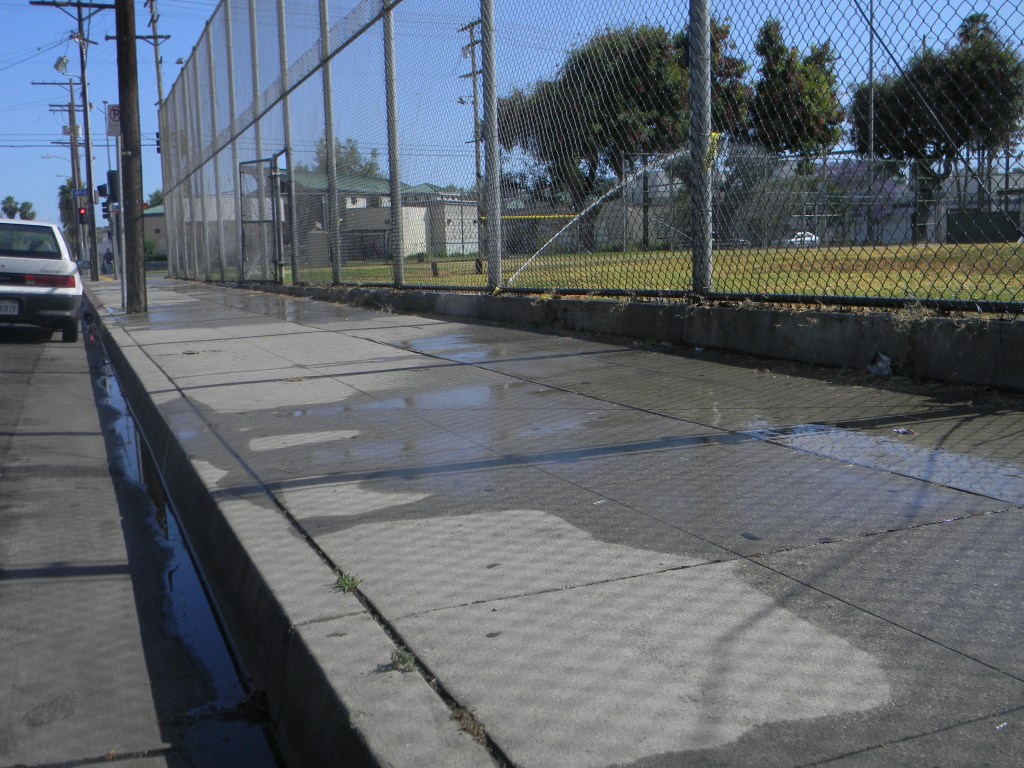 Sprinklers at Pico Aliso Recreation  Center soak the field as well as sidewalks  outside the fence. Photo by Jessica Perez

Instead of accident warnings or Amber Alerts, the electronic message signs on California freeways are lighting up with a new message these days: “SEVERE DROUGHT CONSERVE WATER.”

The California Department of Transportation (Caltrans) is the latest agency to get involved in promoting drought awareness across the state. While Southern California has been in a drought for the last five years, the entire state is now in a severe water crisis for the first time in 15 years.

The situation prompted Governor Jerry Brown to proclaim a drought emergency in January. In April, he went further, asking all California residents to change the way they use their water. “I call on every city, every community, every Californian to conserve water in every way possible,” he says.

The drought affects residential and commercial consumers and farmers. Measures to promote conservation include limiting watering times, imposing fines and educating Californians on water-saving tips. Even so, many local residents aren’t aware of the severity of the situation or what they can actually do to conserve.

This lack of awareness has prompted state and local water agencies to expand advertising to include radio commercials, water conservation tips in movie theaters and notices on the sides of buses.

”¢ No hosing of paved surfaces
”¢ Drinking water served in restaurants only upon request
”¢ No vehicle washing with a hose unless equipped with a self-closing device
”¢ Sprinkler watering limited to 8 minutes per station
”¢ No watering between 9 a.m. and 4 p.m.

Minerva Chávez, a Boyle Heights resident who is an assistant professor at Cal State Fullerton, says she’s now noticing the state’s new efforts to advertise the crisis. “In these last years, I know that we have been in a drought,” she says. “But now we are more exposed to the information. Now [we see it] in the news and on the freeway.”

One shower a day

Chávez says she has made several changes in the way she uses water. “I used to take two showers a day,” she says, “but now I’ve managed to cut it down to just one.”   She and her husband also replaced a grassy lawn with drought- resistant landscaping.

Roberto Estrada, a water conservation specialist at Los Angeles Department of Water and Power (LADWP), says that most residential customers use 50-75 percent more water than they should.“We live in a desert, and people will only realize it when the pipes run dry,” he says.

Simple tips that all residents can use to save water include only using the washing machine with full loads of laundry; washing fruits and vegetables in a pan of water instead of under running water; cooking food in as little water possible; and not letting the water run while washing dishes.   (See chart for more tips.)

Water resource officials say they expect that this year will be among the six driest years in the state’s recorded history. Four out of the last five years have been dry, Estrada says.

But most people don’t understand it’s not all about the rainfall.   “The rain doesn’t do much good,” says Estrada. “It’s the snowpack.”

The Sierra snowmelt makes up 60 percent of the water captured in California for use. The water from snowmelt is used by California’s 38 million residents, as well as to irrigate 8 million acres of farmland. According to the California Department of Water Resources, this year snow levels are only 18 percent of average. 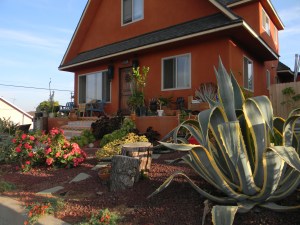 Drought-resistant  plants instead of grass are  a way to save water. Photo by Yazmin Nuñez

As part of California’s drought emergency plan, certain activities are being restricted, and local violations can result in fines by the Department of Water and Power. The regulations restrict watering of lawns, washing cars with hoses running and using water to clean fountains or similar structures. There are also fines for leaking faucets, and restaurants are not permitted to serve water unless customers ask for it.

Some of these restrictions began in 2009, when LADWP imposed mandatory water conservation. The restrictions were strengthened one year later to include  specific watering dates.   At that time, residents were asked to water lawns on just three days a week, and only during limited hours. Later, a rebate program was also offered for customers who put in landscaping more appropriate for the climate.

When Chávez and her husband bought their Boyle Heights home two years ago, the front yard was nothing but dead grass. Conscious of the water it takes to maintain a yard, they decided to change their lawn into a garden of succulents and bark mulch.

Chávez and her husband water only twice a month. She was surprised to learn there were assigned days, depending on whether the last number of the street address is odd or even.   “I don’t know what days I am supposed to water,” she says, “but I’ll figure it out.”   (See chart.)

LADWP officials say the restrictions have been working and that their 680,000 customers today use less water per capita than residents of any major U.S. city with a population over 1 million.

To encourage others to use drought-tolerant landscaping instead of grass, the DWP has a program called “Cash In Your Lawn,” allowing qualifying customers a rebate of $3 per square foot of grass that is replaced. The program requires an application, however, and not every household is accepted.

Chávez and her husband applied for the program, but were told they did not qualify because their water bill was not high enough.   “Because we were already doing our part to conserve water,” Chávez says, “we did not merit a rebate.” Even so, Chávez says they are conserving and saving money every month.

“We are very cognizant that we should be conserving water. I am always thinking about how we can conserve, ” she says.

”¢ Run dishwasher and washing machine only when full.
”¢ Don’t let water run when washing dishes.
”¢ Wash fruits and vegetables in a pan instead of under running water.
”¢ Cook food in as little water as possible