Editor’s note: Paul Hernández, a former amateur boxer who coached dozen of boys and girls and teens at the former East Los Angeles Community Youth Center and then led a campaign to save what was then the longest running public boxing gym in the Eastside has died from COVID-related illness, his family announced in a private Facebook post. He was 62.

Hernández was profiled in a 2015 Boyle Heights Beat story by Samantha Olmos.

The following is a remembrance of the beloved coach by filmmaker, journalist and BHB youth mentor Pablo de la Hoya:

I first met you as a journalist looking into a story about a man trying to keep public boxing alive in East LA. You devoted your life to this mission, invested countless hours into every young adult you worked with and put training them above all else. You didn’t have a gym to train your loyal fighters but you made it work by practicing in borrowed spaces and using public parks.

That was four years ago, and you continued on with your mission to teach and mentor young adults and kids in the world of boxing. Over those years, you weren’t just a subject in a story, you were my neighbor, my friend, and you never failed to give life lessons whether we were watching a professional fight or just passing by each other on our walks.

Thank you, not just for our time but for all the time you devoted to this community and the countless lives you’ve touched telling them to jab and step back. I’m sure you’re still coaching watching over all of us, doing what you loved most.

Below is the story by Beat reporter Samantha Olmos, as it originally ran on Aug. 5, 2015:

As you walk through the double doors, the sound of fists punching bags fills the room. Boom! Bang! Thump! A startling screeching buzzer goes off, signaling to young boxers that it’s time to rest and get a drink of water. Behind the ring, a mural reads, “On the quest to be the best.”

This is the scene at the East Los Angeles Community Youth Center, which opened in 1970, making it the longest running boxing gym on the Eastside. Boxers ranging from eight to 26 train every afternoon, mostly shadow boxing by themselves and sparring with partners.

East Los Angeles and Boyle Heights, where boxing peaked  during the 70s and 80s, have storied boxing histories. The area’s local success stories include Olympic athletes and professional boxers.

Pictures of professionals, such as Muhammad Ali, and Olympic boxers, such as Oscar De la Hoya and Paul Gonzales, both from the Eastside, grace the gymnasium walls.

While some locals have gone on to achieve fame, for others, boxing has been an outlet that helped change their lives.

Paul Hernández, the gym’s janitor and coach, began boxing in the 1970s when he was 13.  Now 56, he says that if he hadn’t been introduced to the sport when he was younger, he would probably be on the streets.

“Never in my wildest dreams did I ever think I would become a coach in the neighborhood where I was a fighter myself,” says Hernández.

Growing up in East L.A., Hernández recalls having a lot of problems with authority. He says his aggression was always getting him into fights. His father, who was also a boxer, took him down to his gym and put him in the ring. From then on, Hernández trained and learned from his father.

Hernández was an Olympic hopeful for the 1980 games in Moscow, but politics got in the way of his dream when the United States boycotted the games to protest the Soviet Union’s invasion of Afghanistan. Hernández says it was a blow that he couldn’t recover from. 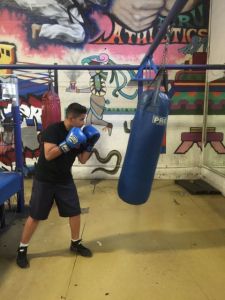 A form of recovery

“My American dream was taken away.  I didn’t know how to handle losing.  I went into alcohol and drugs for a long time,” Hernández says.

Now sober, he teaches boxing to give back to the community and to remind himself of his days in training.

Hernández remembers training with boxer Paul Gonzales, who went on to become the first Mexican American to win a gold medal in the sport.

Gonzales, then 20, won a gold medal at the 1984 Los Angeles Olympics. Today, he works with young boxers at the Eddie Heredia Boxing Club. “I want to be a role model for the youth coming up today” says Gonzales.

Hernández says having boxers from the area who have made it is a great motivation for those starting out. Local champion Oscar de la Hoya participated in the 1992 Barcelona Olympic games and won a gold medal when he was 19. He also won 10 world titles before retiring in 2009. De La Hoya did most of his early training at the Hollenbeck Youth Center. De La Hoya is still involved with the sport today as president of Golden Boy Promotions, a promotional firm for fighters.

Both professional boxers have been long-time role models for boxers on the Eastside.

“He [Hernández] is very serious when it comes to boxing,” says Rosendo Álvarez, 17, who trains at the center. Álvarez’s father is a two-time World Boxing Association Champion, and his son hopes to follow in his father’s steps. He is getting in shape for the summer, when he plans to begin his amateur career.

Hernández coaches as many as 35 boxers at the center, many of them children.

Although the American Academy of Pediatrics recommends that doctors “vigorously oppose boxing” for youth under 19 because of the risk of concussions and other injuries, lovers of the sport say it teaches skills like teamwork and discipline.

“If you want to go anywhere, you have to practice.” says 12-year old Elliot Seguta. He says boxing has improved his social and life skills and made him more fit.

“I used to be really chunky and fat.” says Seguta. “Now I’m losing weight.”  He started training in the sport because he wanted to do something exciting and was influenced by his father, a former boxer in the Marine Corps.

One parent, Chris Vargas Sr., says Hernandez is caring towards the kids. His son, Chris Vargas Jr., is one of the youngest boxers at this gym. He started boxing two years ago at age eight. Now 10, Vargas Jr. says it was a little rough when he first got into the sport.

Hernández says:  “It’s like I’m the director, and they’re the actors. I have to direct the part that they need to play. They need certain qualities to make that movie possible.”

Free (must buy own equipment)