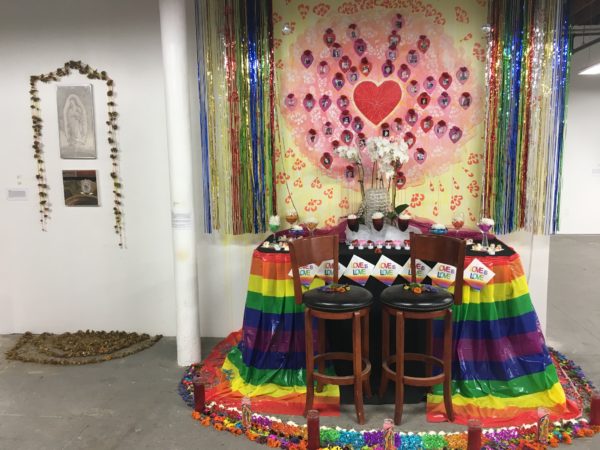 A “Noche de Ofrenda” event at downtown L.A.’s Grand Park and a music and arts festival at Felicitas and Gonzalo Méndez High School in Boyle Heights are part of Self Help Graphics & Art’s month-long celebration of Día de los Muertos –believed to be the oldest commemoration of the holiday in the United States. 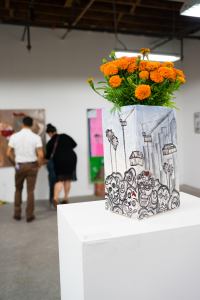 “Altar” to Boyle Heights titled “In Memory of the L.A. Dream,” by Wayne Perry. Photo by Betty Ávila

This year marks the 43rd anniversary of the first DÍa de los Muertos celebration by the Boyle Heights art gallery and studio, which has become an integral part of the Eastside community.

Betty Ávila, Self Help Graphics (SHG) associate director, said the tradition began in the early ‘70s with the organization’s founder Sister Karen Boccarelo, who organized a small-scale event along with the artists of the time.

The first celebrations included a Catholic Mass at Evergreen Cemetery, a procession to Self Help’s original location on Brooklyn Avenue (now César Chávez), along with music and exhibits.

“It was initially on a smaller and much more intimate level,” said Ávila.

A Día de Los Muertos exhibit, at the Self Help studio, runs through early December. This year’s theme is “Recuerdos” and Ávila said it is guest curator Rosalie López’s interpretation of how people keep the deceased in their memories. 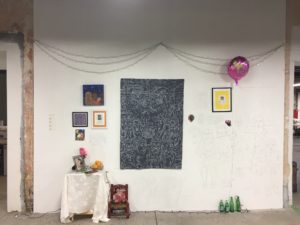 Artist José Lozano, who has been connected to Self Help since the ‘80s, created an art piece that started as a banner, but evolved into a full installation in honor of the parties his mother used to host when he was a child.

“It was supposed to be a flat representation but I began adding items that made it a three-dimensional work,” said Lozano.

A crowd of more than 10,000 people attended last year’s weekend event, and Avila is hopeful this year’s crowd will be just as large.

The month-long celebration has special meaning to Ávila, who graduated from Boyle Height’s Francisco Bravo High School and began her career in art working at the Getty Center.

She always knew she would end up at Self Help.

“It’s a space that is completely community based and it’s such a perfect intersection of art and social justice,” said Ávila.

She said Self Help started the tradition of the Dia de Los Muertos, as it is celebrated today, and is proud to be a part of it.

“It is a cultural holiday that has indigenous roots fused with Catholic and Aztec rituals set around the season of harvest. There is no commercial interest. It’s not about making money,” said Ávila. 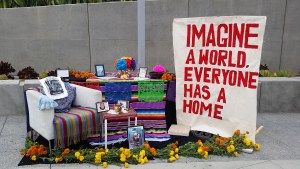 SHG also helps organize the free Noche de Ofrenda event that is celebrating its fourth year at the downtown L.A. park. It will feature performances by Cuicani and La Victoria, as well as CASA 0101’s youth group. There will also be a display of altars created by artists and community organizations, which will be on view at the park throughout the week following the Oct. 29 event.

One of those altars was created by Proyecto Pastoral’s Guadalupe Homeless shelter in Boyle Heights. Shelter director Raquel Román said the theme of this year’s altar is “Imagine a World Where Everyone Has a Home.”

The altar includes a couch, small coffee table and taza that is meant to represent a home. The symbolism of the taza, or cup, has special meaning to Román.

“We serve drinks [at Guadalupe] to the homeless in Styrofoam cups. You can only have a real taza when you have a home,” said Román.

The altar pays homage to all the homeless that have died this year in Los Angeles and includes pictures of those who died that had connections to the Guadalupe shelter.

“It’s our way of showing that they were part of a family,” said Román.

All events are free to the public.