Prosecutors are considering criminal charges against the Sheriff’s deputy who drove an SUV into multiple pedestrians in a horrific accident last year at Boyle Height’s border with East Los Angeles, killing two children and critically injuring their mother. 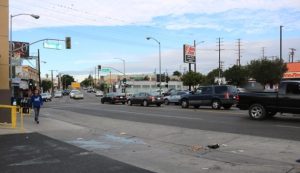 Various media outlets reported this week that the Los Angeles District Attorney’s Office is  reviewing the tragic November incident at the intersection of Whittier Boulevard and Indiana Street that left several pedestrians injured, including a pregnant woman.

The focus of the investigation is an eyewitness’ account that the siren on the Sheriff’s vehicle was not turned on when it crossed that intersection against a red light at high speed, responding to a call of an assault with a deadly weapon involving a gunshot victim.

The police car hit a vehicle crossing the intersection, which set off a fatal chain reaction. Seven-year-old José Luis Hernández was pronounced dead at the scene. His nine-year-old brother Marcos Antonio Hernández was declared dead at L.A. County-USC Medical Center.

A deputy patrol-trainee drove the SUV and her training officer was in the passenger seat when the crash occurred. That trainee, Carrie Robles-Placencia. could face criminal charges of manslaughter or felony reckless driving. She is still working for the LA County Sheriff’s department, but not driving a police vehicle. 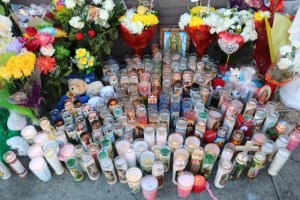 Altar at  the site where two young boys were killed by a Sheriff’s SUV.

The father of the two dead boys is suing LA County and the Sheriff’s department, alleging that the deputy didn’t have adequate training and was driving in a reckless and distracted manner.

ABC Eyewitness News reported that an eyewitness at the scene did not hear a siren from the police car as it crossed through the red light of the intersection. The eyewitness said the Sheriff’s SUV was stopped at that intersection Southbound on Indiana when it took off at high speed and struck an Eastbound vehicle on Whittier Boulevard as it entered that intersection with a green light.

Had the Sheriff’s vehicle turned on the siren,  investigators believe, the Eastbound vehicle entering the intersection could have avoided the crash.  A witness told ABC Eyewitness News that the vehicle, a Honda Accord, was on the right lane and its view was being blocked by a Metro bus on the left lane. The driver of the Honda, the eyewitness said, could not see the SUV’s flashing lights as it crossed the intersection.

The Sheriff’s vehicle jumped the curb as it veered left onto Whittier Boulevard, hitting several pedestrians on the sidewalk on the South side of the street. Investigators determined that the car’s light bar was only activated for a couple seconds before the crash and that the police siren was never turned on.

Local activists have called for the DA’s office to file charges against the deputies involved in the November accident. The two boys’ names were read at a Boyle Heights vigil earlier this month, in memory of local youth killed in officer-involved incidents.