A renewal of on-location filming for the television series “Vida” is not being welcomed by some Boyle Heights residents and activists. 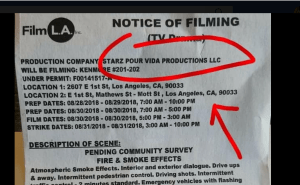 A “hood alert” posted by Defend Boyle Heights early Thursday called for neighborhood residents to show up at a location shooting for the show, which will air its second season on Starz this fall.

The alert included photos of a notice informing residents near a location on East First Street where some scenes were to be shot Thursday. One notice said filming would take place Thursday from 5 pm to 3 am. A description of some of those scenes said they would film simulated “tagging” on walls and a protest or march, among others.

Update on 08/31: Around 11 pm Thursday, about two blocks of First Street East of Soto were closed to traffic to allow for production equipment to move in. A security guard stood in front of a location where activists said they would show up and several police vehicle patrolled the area, but there were no reports overnight of any protest.

Vida, which premiered in May, tells the story of two sisters who return to Boyle Heights after their mother dies, to take over a bar run by the late woman’s wife. Several well known Boyle Heights locations appear on the show’s six-episode first season.

The show has been praised for its diverse characters –including several that are brown women and/or queer– and for its employment of a diverse cast and crew.  But the local group, a coalition of community-based organizations that fights against gentrification in Boyle Heights, accuses the show of appropriating the neighborhood’s character while ignoring many of the serious issues the community face.

‘The show… tastelessly exploits the anti-gentrification struggles of Boyle Heights,” the group wrote in a blog post Thursday. “It pokes fun at the serious movement organizing around tenants rights, deportation defense,  and police brutality.”

In May, the show’s creator and executive producer Tanya Saracho said in an interview on KCRW’s The Business that she was surprised when protesters showed up during on-location filming for the show’s pilot episode last year.

Saracho said she was “grateful for the discussion because the discussion is this show… it’s about gentefcation, and I’m embodying that.” The showrunner, who said she identifies as Latinx and queer, said the show’s writers “engaged with the community, had a community liaison, visited non profits, talked to street vendors,” to get the neighborhood right.

Listen to the interview here: