The actors were supposed to represent Lucha, a Mexican girl, and Jameson, an Anglo boy, falling in love and sharing a first kiss in romantic Hollenbeck Park. It was a scene from “Hopscotch,” a mobile opera that carried performers and audience members in limousines through various Los Angeles neighborhoods, including Boyle Heights.

The New Yorker said it was “awe inspiring” and the New York Times called it “haunting”. But in a lengthy Tumblr post, “Serve the People Los Angeles” –a Maoist organization that gave away food at Hollenbeck Park– declared it an “exclusively white petite-bourgeois circus-like performance.” 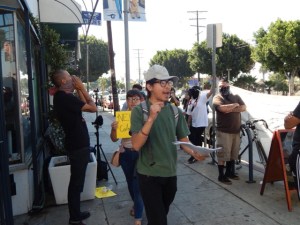 The group asked the performers to leave the park and, when they refused, they enlisted members of the Theodore Roosevelt High School Marching Band to disrupt the show. That final performance of “Hopscotch,” on November of 2015, marked the beginning of Defend Boyle Heights.

“We used that as the day that folks realized that we needed something stronger than just individuals fighting gentrification in Boyle Heights,” said Angel Luna, a 24-year-old Boyle Heights activist and a leader of Defend Boyle Heights, a coalition of five Eastside-based community organizations.  “That we needed an aggressive and militant front […] saying out loud we don’t want gentrification and we’ll do whatever it takes to push back against it.”

Defend Boyle Heights’ coalition members include the radical East LA Brown Berets, whose history dates back to the1960s, as well as Unión de Vecinos, a tenants right group that formed to fight against the displacement of families in the Aliso Village housing project in the 1990s. The other coalition members are the feminist Ovarian Psycos Bicycle Brigade and the media group Undeportable Productions. 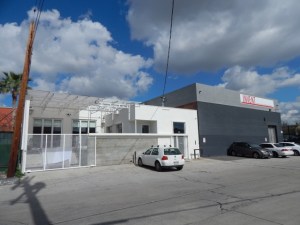 Defend Boyle Heights members hold community meetings where its leaders use Power point presentations to detail the causes and effects of gentrification and identify the movement’s biggest foes. Attendees are mostly young people of color, the majority of them Latinos.

Defend Boyle Heights is part of another coalition too, Boyle Heights Against Artwashing and Displacement, or B.H.A.A.A.D, and both have targeted the art galleries in Boyle Heights’ warehouse district, calling for a boycott and staging protests. The recent arrival of these upscale businesses, the activists believe, will push up rents in surrounding neighborhoods and force the displacement of low-income tenants.

Members of the two coalitions paint the galleries as connected to developers and “very big political economic players in Los Angeles,” and as not caring about the needs of the local community. 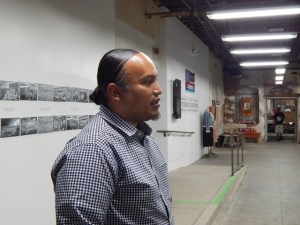 But the organization that Defend Boyle Heights has singled out in its rhetoric, social media campaigns and protests is Self Help Graphics & Art, calling for a boycott of the 45-year-old arts community organization, widely seen as a key player in the Chicano Arts Movement of the 1970s. Luna said that the group was targeted because some of its leaders worked as consultants with the “Hopscotch” opera. He accuses the non-profit of  “material aiding” of the Boyle Heights art galleries.

Joel García, director of programs and operations at Self Help, denies the organization has any involvement with the galleries. He said that Defend Boyle Heights and Self Help actually share some of the same goals.

Self Help Graphics “was founded because there hasn’t been space for artists of color in those galleries,” said García.  “So, why would we work with entities that do not want us there. We don’t work with any of those galleries, and they don’t want to work with us.” 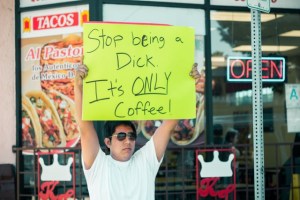 A specialty coffee shop on César E. Chávez Avenue has become Defend Boyle Heights’ latest target. Minutes after Weird Wafe Coffee Brewers opened in mid June, protestors started marching on the sidewalk in front of the café and the coalition called for a boycott. The activists saw the arrival of the upscale café as a first sign of gentrification, pointing to the growth of trendy specialty coffee shops in Highland Park and Echo Park.

Two men running the shop –co-owners John Schwartz and Jackson Defa – posted a “Latino Owned Business” sign in the window. Mario Chavarría, a third co-owner, dismissed the protesters as a “polarizing group” that does not represent the Boyle Heights community at large

“I think their whole message is getting lost and they’re actually here highlighting race, simply because my friends happen to be Caucasian,” said Chavarría, who was born in El Salvador and raised in Inglewood. “The rhetoric doesn’t make sense, it’s backfired. It has actually made the community engage us more as a new shop and a new business and they’ve all come out and supported us.”

Weird Wave helps the local economy too, Chavarría said, by purchasing from Homeboy Industries, a gang-re-entry program, and other local vendors.

“Gentrification already took place and we’re just a mom and pop coffee shop that’s trying to sell coffee,” said Chavarría. “I don’t see where the problem is with that.”

Saúl Soto is a rising senior at Francisco Bravo Medical Magnet School. He enjoys photography, spending time with friends and watching movies. He hopes to attend a four-year university after high school.

Ernesto Orozco is finishing his last year of high school and hopes to attend art school and study photography. He enjoys video production and exploring the city.