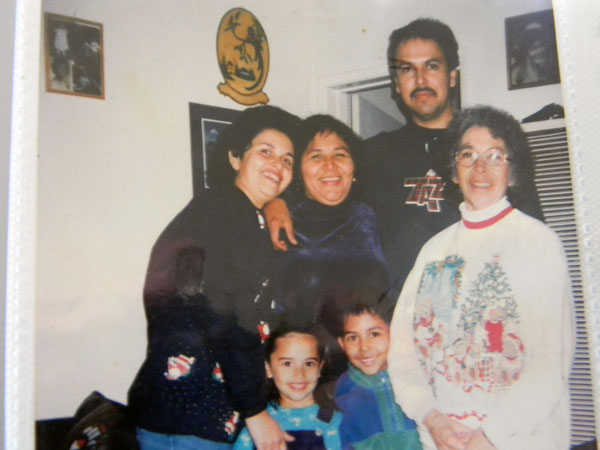 Boyle Heights Beat interviewed a mother and son who experienced domestic violence, Galya Gonzales and Angel Toscano. In these stories, each shares a unique perspective on the impact on their lives.

It is said that Latinas are fierce. Some are kind; others are quiet. But looks can be deceiving. Who can really know what any woman is thinking, what she is feeling, what she is not saying?

For years, people saw Galya Yelena Gonzales as someone who smiled and laughed easily. But no one really knew what she was going through. She hid her secrets and her deepest fears ”“ including the fear of speaking up.

Gonzales is a survivor of domestic violence. Born in Guatemala, she immigrated to the United States at the age of 16 and then lived through domestic violence for about seven years. “It was a lot of violence, too much mistreatment, too abusive, and I could not take it any more. All I did was cry,” said Gonzales, 49, as she took off her glasses to wipe her tears during an interview at her home in South Gate.

Nearly one out of four women suffer from beatings or rape by a partner, according to the National Network to End Domestic Violence. Women of all races are “equally vulnerable” to domestic violence, according to the Bureau of Justice Statistics. Yet Latina women confront unique challenges.

A study conducted by Casa de Esperanza in El Monte, which helps women who suffer from domestic violence, found that Latina victims are less likely to seek help because of fear of deportation, religious and cultural teachings about the role of women, and the language barrier.

Alex Morales, president and chief executive officer of the Children’s Bureau of Los Angeles, has devoted his career to preventing family violence. He describes each potential contributing factor as a “basket.” One of the most basic baskets is the clash of personalities between a man and woman in a relationship.

“Maybe the guy has a violent temper,” Morales says. “Maybe the woman has been mistreated by someone else and feels [like she is] a failure.”

Another basket is stress. The man could have been through some stressful experience, such as losing a job, and releases his anger by beating his partner, an easy target.

Financial instability is the most common cause of stress, Morales says. It also can become the reason a woman does not leave her abuser, especially if he is the family breadwinner.

One of the most challenging baskets for Latinas face is culture and religious beliefs. “This is the one most people don’t pay attention to,” says Morales. “Certain ethnic groups and certain religions support the women being inferior.”

According to Casa de Esperanza, religious beliefs may stop some Latinas from seeking help because they believe that the “sanctity of marriage” precludes divorce or separation.

“Some faiths teach you, ‘Well, if things are bad for you, that’s God’s plan for you,’” Morales said.

Gonzales, a victim of both physical and verbal abuse, initially wouldn’t leave her abusive partner because she feared he would kill her. In addition, she did not want her son to grow up without his father.

Gonzales’ partner was a butcher. He would show her his knives as he sharpened them and threaten to kill her. She realized she had to make a decision — and fast — the day he became abusive to their son, shoving him roughly to the ground. She did not want her son’s life to be in danger as well.

Gonzales was a very joyous person at work, at a restaurant in Boyle Heights, and she seemed like a person with no problems. But she would talk to her manger about the abuse she experienced at home.

“He would tell me, ‘Report him. Leave him,’” Gonzales said. “I was living in a country where I could speak up. But I wasn’t.”

One day, a police detective who regularly ate lunch at the restaurant noticed her quietly sobbing while taking her lunch break in a corner.

The detective asked what happened. With tears rolling down her cheeks, she told him about the abuse. He encouraged her to take her son for medical help for his bruises and suggested she go to counseling. Gonzales received counseling from the East Los Angeles Women’s Center.

Reportingher partner left her feeling both intimidated and relieved, Gonzales said. Going to court made her feel good, because she received a lot of help.

Gonzales spoke up. She does not regret it. She knows now that help is out there. “I came out of an ocean in which my son and I were drowning,” she said. “I came out and fought against all my bad experiences. I came out.”

“Those waves of the oceans. All that turbulence, I already went through it. My heart is now happy.”

Domestic violence: Where can you get help?