After years of touring the country with his one-man show, performer, educator and activist Dan Guerrero returns to his Eastside roots for a couple of performances at East Los Angeles College in November that will be filmed and archived for posterity.

In “Gaytino! Made in America,” the 78-year-old West Hollywood resident talks about growing up in East Los Angeles in the 1950’s – not only as a Latino, but also as a gay man. In the show, which has been hailed by critics, Guerrero celebrates the lives of two men who were tremendously influential in his life: his famous father, Lalo Guerrero, a Chicano musical icon; and his childhood friend, the late painter Carlos Almaraz.

“Gaytino!” takes audiences through Guerrero’s journey from his Eastside neighborhood to the fast-paced energy of New York –where he worked on Broadway, both as a performer and an agent– and his return to Los Angeles in the 1980’s as a “born-again Hispanic,” vouching for more visibility for Latinos in media. As Guerrero began producing and directing for television, his social activism for Latinos and LGBTQ individuals became prominent.

To raise funds for the upcoming taping, Guerrero has launched a crowdfunding campaign. He was interviewed for the Boyle Heights Beat’s #RadioPulso podcast at a fundraiser that doubled as a birthday celebration this month at Casa Fina restaurant.

Guerrero recalled that Garfield High School was a much more racially diverse campus when he went there six decades ago. He said that while he did not experience overt discrimination, he rarely saw a Latino portrayed in media. Back then, he added, being gay was not even discussed.

“It was a lack of visibility as a Latino; gay wasn’t even that,” Guerrero said. “You didn’t talk about, it was never discussed. People would yell ‘sissy, sissy’ or ‘maricón.’ But you didn’t know anything about it. There was no stories on TV about it; no magazine articles. It just didn’t exist.”

“Latinos existed,” he went on.  “And they were being discriminated, very often. But the gay community didn’t really exist. It was like this big secret.”

The irony of performing at ELAC is not lost on Guerrero. 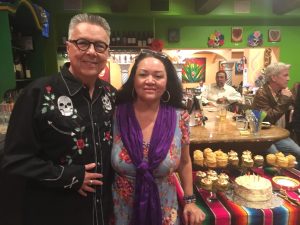 “I’m going to be filming my solo show ‘Gaytino!’ at East LA College, and I thought, ‘How ironic,’?  because when I was going there, I graduated in ‘61 from East LA College, I wouldn’t even say the word gay. And now I’m going to be on stage singing and dancing about being gay in the very school I used to walk the campus –how many years ago? 50? 60? So I’m figuring there is some progress. You can’t say it isn’t progress. “

The upcoming taping won’t be the first time he performs “Gaytino” at the ELAC campus. The last time was a special performance in 2015, in relation to a Carlos Almaraz retrospective at the school’s Vincent Price Museum.

That time, he said he was shocked to find ELAC was holding its first gay pride celebration.

“I thought ‘holy crap!’ We are in 2015 and they are having their first gay pride at East LA College? Catch up kids. First gay pride and here I am doing a show about being a gay Latino. There was something poetic about it.”

“So yeah, it means a lot going back to my old school. And Carlos [Almaraz]’s too. He didn’t go to ELAC, but he was very much a product of East LA, so to be doing this show there has a very special meaning.”

Part of “Gaytino’s” success, he said, was the show’s ability to give out a message in an entertaining context.

Perhaps his most memorable performance of the show, he said, was in Washington, D.C. “To be at Kennedy Center, it was very heady, very emotional,” he said.

The “Gaytino!” film will be accompanied by a study guide, and both will be available to university and college libraries for study and archival purpose.  The film will also become part of the Dan Guerrero Collection on Latino Entertainment and the Arts at the University of California, Santa Barbara and in the Dan Guerrero Research Collection housed at the UCLA Chicano Studies Research Center that includes his oral history recorded for their LGBT and Mujeres initiative project.

While his indiegogo campaign is close to reaching its “flexible” goal of $35,000 by the Oct. 26 deadline – at press time it had 89% – Guerrero said a more realistic goal of $50,000 will help assure all the costs of production are covered, and that donations would continue to be received into 2019.

Both performances of “Gaytino! Made in America” – on Sunday, Novermber 11, at 2 and 7 pm – will be open to the public. Tickets will be free but audience goers must RSVP – instructions are yet to be announced.

As part of its West Hollywood Artists and Icons series, the City of West Hollywood’s Arts Divisions presents: A Conversation With Dan Guerrero moderated by Tony Estrada on Sunday Nov. 3, 5 to 5:30 pm. Event is open to the public and free with RSVP.

Listen to a portion of Dan Guerrero’s interview on Episode 7 of the #RadioPulso podcast: