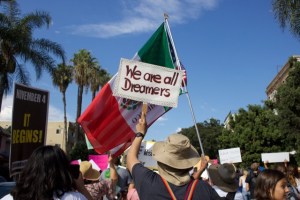 Share Your Views: How would end of DACA impact you, your family, your neighbors?

Please take a moment to share your views  and your situation by clicking on this survey link. You can answer questions anonymously or with your name.

This is a series of community profiles by Boyle Heights Beat youth reporters and starr in response to President Trump’s decision to rescind the DACA program. Profiles include people who responded to our survey. 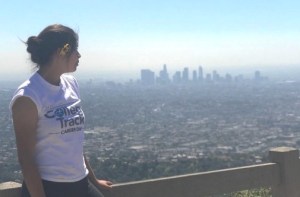 Abby is a 17-year old Boyle Heights resident and high school student with two older sisters who attend UCLA and UC Santa Cruz and have both been granted work permits through DACA.  Although she herself won’t be able to receive DACA benefits,   Abby believes that all the attention being given to the termination of DACA will further improve the Dream Act movement.

“I feel like more people are becoming aware of DACA and of the limitations that undocumented [people] have, it is bringing awareness, and we’ll start to organize and begin to demand the [enactment] of the Dream Act, allowing us a pathway to citizenship,”  she says. Like so many Eastside residents, Gabriela Medrano grew up in a family of mixed migratory status that includes several Dreamers.  Because several of her family members and friends are DACA recipients,  The 28-year-old East Los Angeles native feels the program’s end will have a “severe impact” on her life.

“My mother came to this country to give me a better life. For her sacrifice, I will be forever grateful. I plan to give her sacrifice a voice, and fight for those who are not afforded the same privileges that I have,” she wrote in our survey.

Erick Huerta: ‘I can’t be a Superman’ 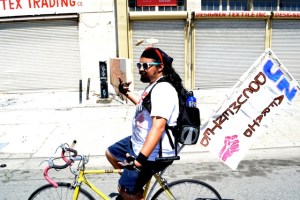 While many are taking to the streets to protest the end of the Deferred Action for Childhood Arrivals, Erick Huerta, a 33-year-old activist from Boyle Heights, offers a different perspective. He’s decided to “tune out,” not because of a lack of interest, but because of past experiences.

“There came a point where I realized that I can’t do everything,” he said. “I couldn’t save everybody. I can’t be a Superman.”

Fabi: From fear to anger

Fabi is a 20-year-old Boyle Heights resident who was  born in Durango, Mexico and came to the United States at four. She said she enjoyed the security the DACA program provided, and Trump’s decision brought her fear and then anger, but she said she hoped to turn those emotions into activism.

“I think my community is really stepping up to the play.  A lot of communities don’t really support not only Dreamers, but immigrants, in the way that ours does”, she said.

Aileen is 17- year-old Boyle Heights resident who applied for DACA at the age of 16. Her older brother was able to get DACA as well. The program provided her brother with the opportunity to pursue a higher education and gain access to employment. Now a high school senior, Aileen fears that she will be financially limited when applying to colleges.

“Instead of moving forward, we’re moving backwards again,” she said. “It’s a hard or uncomfortable time, where everything can be put up for debate.”

Groups and organizations that assist DACA recipients and undocumented immigrants.

What happens next: DACA questions answered

Boyle Heights Beat readers were surveyed about what questions they have about their rights under DACA following President Trump’s announcement that he plans to end the program.

The Trump administration said on Sept. 6 it will rescind the  DACA program that granted temporary protection from deportation to some 787,000 undocumented immigrants who were brought to the country as children –also known as Dreamers.

The administration will let the program wind down in six months, giving Congress until March 5 of next year to enact legislation that may provide a path to regularization to some Dreamers.

The Deferred Action for Childhood Arrivals, is an executive order announced by President Obama in June 2012 that grants temporary protection from deportation to undocumented immigrants who were brought to the country as children. Successful applicants to DACA may also obtain work permits and attend college.

Who is eligible for DACA?

To apply for the programs, immigrants have to have come to the US before 2007, and have been 15 or younger when they arrived and younger than 31 when DACA was created.  They had to have a clear criminal record and be enrolled in high school or have a high school diploma or equivalent.

Who are DACA recipients?

While an estimated 1.3 million people are believed to be eligible for the program, fewer than 800,000 have it.

Most of the immigrants protected by the program are in their 20s and as old as 35.

If DACA ends, what should I do?

The Immigrant Legal Resource Center has put together an useful community advisory with several points to keep in mind. Among them:

Various groups recommend that all people –citizens and noncitizens– carry cards with reminders to exercise their rights to remain silent if questioned by immigration agents.

On its website, the ILRC offers a page with instructions on how to print the cards in Spanish and English.