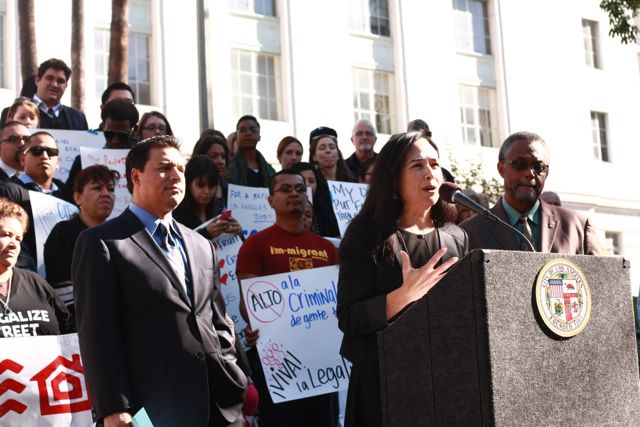 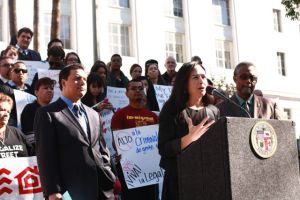 Two Los Angeles City Council members have taken the first step to changing laws that prohibit the selling of food and merchandise on city streets.

Councilman Jose Huizar and Councilman Curren Price introduced a motion Wednesday calling for a study that would look at how the City can legalize street vending.

The Los Angeles Street Vendor Campaign, a coalition of more than 40 community-based organizations, lent support to the motion.

“The time has come to legitimize food vending in a way that ensures safety for the public, and creates economic growth and opportunities for vendors,” said Huizar in a statement.

Currently Los Angeles is the only one of America’s ten biggest cities, where vendors can be arrested and prosecuted because the sale of food and non-food items on sidewalks is illegal.

Storefront business owners have long complained that sidewalk vendors are unfair competition because they don’t pay rent or taxes.

Huizar said, to address concerns, the city could have rules keeping vendors away from established restaurants, and allow restaurants to set up their own sidewalk sales.

While vendors currently work in an unregulated environment, they are part of a popular food culture. Over the years thousands of low-income vendors have been hit with hefty fines, confiscated equipment and incarceration because of the law.

According to Department of Health Officials, there are an estimated 10,000 sidewalk vendors currently operating in the city of Los Angeles.

Advocates say legalizing street vending can provide long-term job opportunities, as well as healthy food options for low-income neighborhoods such as Boyle Heights. It would also increase revenue to the City.

According to Huizar’s office the current motion calls for two reports in 90 days, one for food vending and the other non-food vending, and then “the real work will begin.”

The Los Angeles Street Vendor Campaign has been working with residents, business owners and city officials over the last two years to help draft legislation, and to provide a licensing process for vendors.

“I am very excited that we are finally being heard,” said Vasquez. “This will help a lot of people like me who don’t want to live their lives fearing the police or an arrest.”

Organizers for East Los Angeles Community Corporation, one of the organizations behind the effort, said they are excited about this first step, and looking forward to having the policy before the City Council early next year.