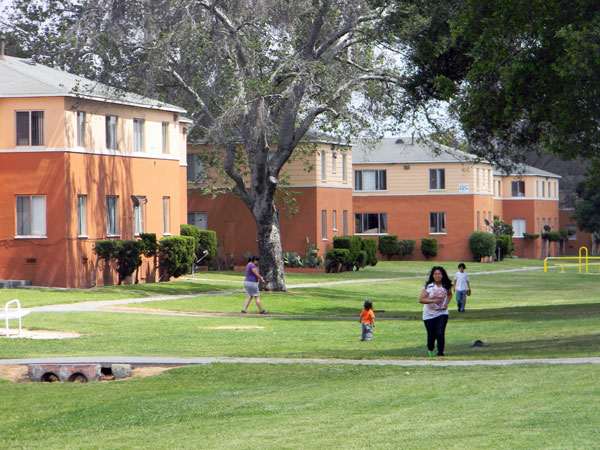 Children playing soccer in the grass. Families celebrating birthdays in their backyards. The smell of carne asada in the air. This is what a typical weekend is like at the Wyvernwood Garden Apartments in Boyle Heights.

But for many, the question is for how much longer? Tenants face dramatic changes as a developer moves ahead with plans to replace their homes and build a new office, retail, and residential community.

Wyvernwood, locally known as the Eight Street Apartments, houses 6,000 residents in 1,187 units spread across 70 acres. It was built in 1939 and is a registered landmark in the California Register of Historical Resources.

The Fifteen Group, a real estate investment firm, purchased the apartments in 1998. Its proposed redevelopment project would more than triple the number of apartments (to 4,400) and the number of residents (to 20,000). It would add condominiums, offices, parks and shopping centers and include the construction of 24-story high rises. The redevelopment would cost roughly $2 billion and take 10 years.

The proposed project has provoked a lot of controversy that could heat up again this summer when the Los Angeles Department of City Planning finishes its review of the project (called an Environmental Impact Report, or EIR).

While some Wyverwood tenants admit their homes have problems and need repairs, they say that the negatives aren’t enough to make them want to leave. The design of these historic apartments fosters community, they say, and they love the open, green spaces and their way of life.

“This is like a small village inside of a big city. We think of it as the jewel of Boyle Heights, said Leonardo López, a tenant and president of El Comité de la Esperanza, which is organizing against the project. “We are fighting to keep the community as it is today and the sense of community alive.”

Karina Muniz, of the Los Angeles Conservancy, has worked with tenants who want to preserve the apartments. “One of the things that is so important about these buildings is ”¦ the design, [which] fosters community,” she says. “You’re not going to have the type of housing. You can’t build what was built in 1939.”

Still, Wyvernwood isn’t paradise. Resident Elsa Pérez enjoys the open space, but does not like the cucarachas, the peeling paint, or the lack of a fire extinguisher outside her unit. She would like to see improvements, but may move before a decision is made about Wyvernwood’s future.

The developer argues that the project will benefit the area. Stephen Fink, vice president and principal of the Fifteen Group in Los Angeles, says the project will bring more tenants and tourism to the area, as well as 10,000 construction-related jobs and up to 3,000 permanent jobs.

And the quality of life in the new apartments will be better, with more bathrooms, air conditioning, and safer environments for children to play, he says. New units will be eco-friendly, with water-saving faucets, washers and dryers, and toilets. “The project addresses a lot of the safety considerations that have been a plague in the community for some time,” he says.

Because of the promise of new jobs, the project has won the backing of organizations such as the LA County Federation of Labor, Jovenes, Inc., Homeboys Industries, and El Centro de Ayuda.

While Jose Huizar, the local councilmember, first supported the redevelopment, he came out against it in March. In an interview with Boyle Heights Beat, he described the fight ahead as a battle for justice. “There is a community that has existed [there] for decades who like what they have,” he says. “They just want to see improvements and not see the whole thing torn down and something put up that will displace them.”

Huizar also has expressed concern about the increased density of the apartments, since Boyle Heights is already one of the densest neighborhoods in the city. Wyvernwood has 16 units per acre, and the proposed project would have 55.

Although residents have voiced concerns over the project for the past few years, the fight has more rounds to go. The developer hopes to begin construction in early 2013, but opposition could delay or even prevent it.