A litany of names of fatal victims of police officer- or Sheriff’s deputy-involved incidents –mostly young, Latino males– were read at a vigil this month, where community members and activists commemorated the second year anniversary of the death of Jesse Romero. 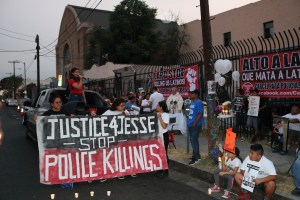 The 14-year-old boy was killed by police in the most controversial of several officer-involved shootings in Boyle Heights in 2016. An internal investigation by the LAPD found that the shooting by officer Eden Medina was justified; County prosecutors also found that the officer used “reasonable force” and refused to charge him for the incident.

But activists gathered at the Aug. 9 vigil called for Los Angeles County District Attorney to prosecute Medina and other police agents involved in similar incidents.

“Thanks all for coming and showing your support,” said Germán Romero, the teen’s father. “Our struggle continues,” he added, before introducing his wife Teresa Domínguez. 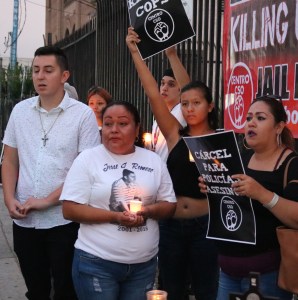 “My name is Teresa and I’m Jesse’s mom,” Domínguez said, “and we’re here calling for justice for [my son], who was shot by police. It is not just that some police are killing our youth.”

The teen’s parents were also accompanied by their lawyer, Humberto Guízar, who is representing them in a lawsuit against the city and the Los Angeles Police Department. Guízar warned attendants that they should remain vigilant and advised them to use their phones to video any activity where they suspect police are acting incorrectly. 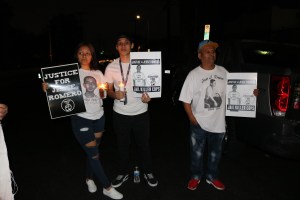 The message was repeated by Sol Marquez, an activist with Centro CSO who organized the vigil.

“Jesse Romero isn’t even an isolated case,” she said.  “There are many other people who came out today, from Boyle Heights, El Sereno, Long Beach… It’s all people who’ve had their lives torn apart by LAPD and Sheriff’s Department.”

One of the evening’s most compelling testimony came from Helen Jones, the mother of a 22-year-old man named John Horton who in 2009 was found dead hanging in a Los Angeles County Jail cell. Horton was placed in solitary confinement and not in mental health unit, as required by a court order. The case was cited as an example of neglect and the County Board of Supervisors settled Jones lawsuit with a $2 million payment. 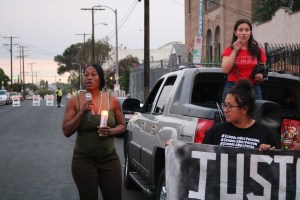 “These departments think that they’re going to get away with killing our kids and [that we’re going to] turn a blind eye and go home and keep living our lives… “ she cried out. “We’re here to fight back. We stand with you all here. We stand with everyone’s kids here.” 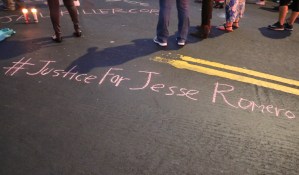 Another family at the vigil was that of 17-year-old José Méndez, who was killed by LAPD in an officer-involved shooting in February of 2016. The Méndez family is also suing the city and LAPD.

Unlike a first-year anniversary vigil in 2017, LAPD officers were notably absent this month. Organizers obtained a permit for the event and transit officers blocked off traffic for a few hours so that the vigil and religious ceremony coult take place. Attendees brought flowers and candles to an altar that has remained at the site of the shooting –near Breed Street and César Chávez Avenue, since 2016. 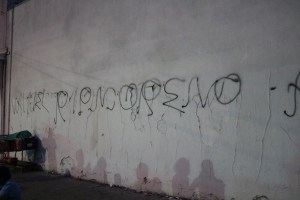 A graffiti tag that read in part “RIP Moreno” (Jesse’s nickname) and “F…LAPD” was painted on a nearby wall before the vigil and remained there overnight. By the following afternoon, it was painted over.