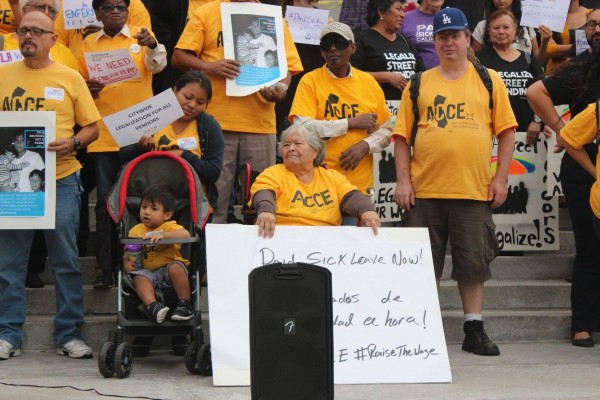 Los Angeles does not appear to be ready to approve a measure that would allow street vendors to sell their goods legally on city streets.

On Tuesday, members of the city’s Economic Development Committee heard a city report outlining three possible options for a street vending program –a citywide program, one that would establish specific vending districts and a hybrid third, that would allow different communities to decide how to regulate street vending.

The three options were presented to the committee after months of community meetings held by the city, including one held in June in Boyle Heights. A fourth option would be to leave in place a current ban on street vending.

KPCC reported that after more than an hour of additional public input on Tuesday, committee members asked the Chief Legislative Analyst’s Office and other city departments to provide more information on how a street vending program would work. The committee postponed a vote on any of the proposals until it receives information on how much the program would cost, how vendors would be permitted, where they should be placed and how they would be policed, among other issues.

KPCC said that the committee appeared to favor the hybrid model, which would legalize street vending citywide but allow local communities to have a say on how street vendors operate.

Some city officials said a citywide program without local restrictions would be easier and cost less to implement. The citywide model is also favored by community groups that advocate for the legalization of street vendors in Los Angeles, and who participated in a rally outside of City Hall before the Tuesday meeting.

One of those groups is the East LA Community Corporation, a Boyle Heights based not-for-profit group that belongs to the wider Los Angeles Street Vendor Campaign (LASVC).

“Today, there is an opportunity to create policy which strengthens the local economy by passing a citywide street vending policy with common sense guidelines for small businesses that street vendors operate to continue their contribution to the vibrancy of our neighborhoods,” said ELACC President Isela Gracián in a statement.

But there’s strong opposition to a citywide plan, especially from merchants in some commercial zones like downtown L.A.