An Eastside church that was a focal point of the Chicano movement of the 1960s and ‘70s could share $2 million in preservation funds as part of a national vote-in campaign that ends Friday.

The Church of the Epiphany in Lincoln Heights is one of 20 sites nationwide competing in the 2018 Partners in Preservation: Main Streets Program sponsored by American Express and the National Trust for Historic Preservation. 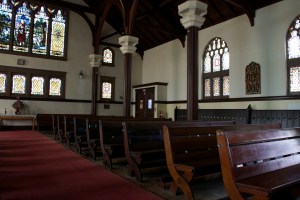 Interior of Church of the Epiphany in Lincoln Heights. Photo by Oscar Vargas.

The Eastside church is the only Southern California site selected for the program, which focuses this year on places that contributed to the diversity of the country and the struggle for equal rights. If it’s one of the venues that receive the most votes from the public by October 26, the Church of the Epiphany would receive $150,000.

“We desperately need these funds to continue restoring one of the most important symbols of the Chicano movement in California,” said the church’s vicar, Father Tom Carey, in a press release. “The church is a pillar of social justice activism on behalf of the Latino community and provides important services beyond spiritual support such as a food bank and community garden, tutoring, and health care and legal clinics for immigrants, refugees and our naturalized parishioners—all of whom face harsh realities today because of this Administration’s heartless policies.”

Built in 1887 and renovated in 1913, The Church of the Epiphany is the oldest operating Episcopal Church in Los Angeles and was designated as a Los Angeles Historic-Cultural Monument in 2005 by the City Council for its pivotal role in the Chicano civil rights movement of the 1960s. La Raza, an underground pro-Chicano newspaper, was printed in the church basement, which also served as a birthplace of the Brown Berets, Chicano activists who protested Vietnam, police brutality, educational discrimination and the mistreatment of farm workers. 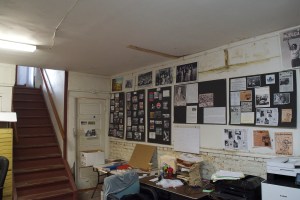 Basement of the church. Photo by Oscar Vargas.

In spite of its continued presence in the Lincoln Heights community, in recent years the church has fallen into disrepair. That includes a basement that houses a collection of historic photographs and documents from Epiphany’s social justice activism, stored there as part of the People’s History Project.

Those interested can go to VoteEpiphany.org, where they can vote for the Church of the Epiphany and sign up to receive voting reminders by email or text. There are no age restrictions and voters can cast as many as five votes a day every day for their favorite site. The public can also vote at VoteYourMainStreet.org, hosted by the program’s media partner National Geographic.

The $150,000, if raised, would serve as a foundation for a capital and fundraising campaign launched last year. That campaign was initiated after the church was selected to participate in a grant-matching program for capital building projects at historic houses of worship by the National Fund for Sacred Places.

In addition to storing the People’s History Project, the renovated basement would become home to the legal and health care clinics held regularly at the church.

Winners will be announced on October 29. Los Angeles’ historic Formosa Café in West Hollywood was a winner in last year’s competition.