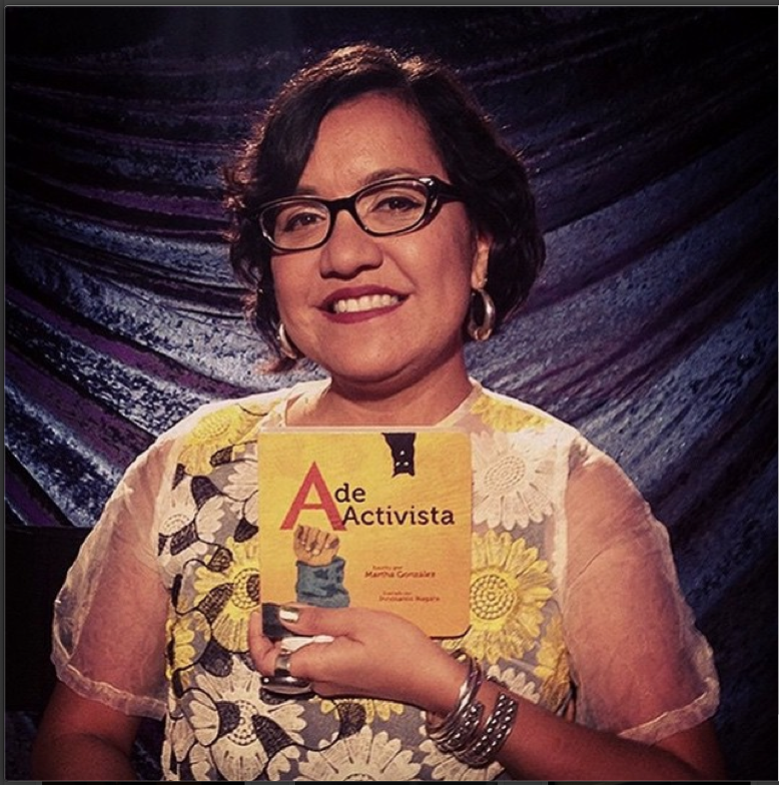 For Chicana activist Martha Gonzalez, most days consist of teaching college courses, performing with her Grammy award-winning band, Quetzal, or caring after her 9-year-old son, Sandino.

But recently, the Boyle Heights native has been working hard on her ABCs with the debut of her board book “A de Activista.”

The book, a Spanish adaptation of “A is for Activist” written and illustrated by Innosanto Nagara, goes through the alphabet from A to Z with a theme of activism and social justice.

While the book is written for 1 to 12 year olds, Gonzalez says the content is also beneficial to adults. It illustrates complex topics such as Feministas (feminist) and Trans, and presents them in a simple light that is relatable to all readers.

Boyle Heights Beat spoke with Gonzalez who shared more about how her experiences shaped her decision to write her first children’s book.

BHB: Were there any major revelations you had growing up in Latino LA that made you realize that there was a need for social change?

MG: “We didn’t feel poor until we started seeing what other communities had. Especially for me who started getting bused out, you start seeing what others have that you don’t. And I think that was a real awakening to sort of think that ‘Oh wow I guess we’re poor?’

But I think that over the course of the years I also started seeing all the things that we did have. We may not have had a whole lot of economic resources, but in our communities there’s a whole lot of talent, beauty, art and creative expression. Often times because of the hardship and the lack of the economic resources, but we find other ways of building”¦. And so I think that even as I knew that we needed change and we need all these concrete things like better schools, better structure, more funding for different things. I also, even in no understanding that early on, realized the beauty in all the abundance we have as well. So there’s a need for social change, but there’s also a need for us to also change our mindset and to think about all the good things that we have, all the beauty that we have in our community and all the strength that is there even in the struggle.”

BHB: What gave you the idea to write about these issues in a children’s book, a format usually populated by fairytales and fables?

MG: “[Innosanto Nagara, the author of the original book “A is for Activist”] contacted me on Facebook about a year and a half ago”¦.The first thing I told him was like, ‘Look, I’m not a Gabriel García Márquez type of Spanish writer. My Spanish is Mexicano Spanish for one, colloquial, like my parents are originally from Guadalajara, and I was born in East LA in Boyle Heights, but I’m the kind of Spanish speaker that you’ll get from a first generation.’ He said, ‘No I don’t care. I like your lyrics and think that whoever does it has to be creative about how they put it together.’ And I was like, ‘ok well, I’ll give it a try.’ That’s how we started, and we did it and it went really well. We got it down and the publisher liked it and we went through with it. Next thing you know we had this whole thing out.”

BHB: What is the one piece of advice you would want to give to youth who want to follow this path and write their own children’s book?

MG: “I would say that it is important to read a lot of children’s books because I don’t think children’s books are necessarily easy to write. Read to kids to see what they stick to. I try to be really ‘catchphrase-y’ when I wrote the children’s book because I could see that my son would respond to that kind of stuff better”¦ Do your research!”