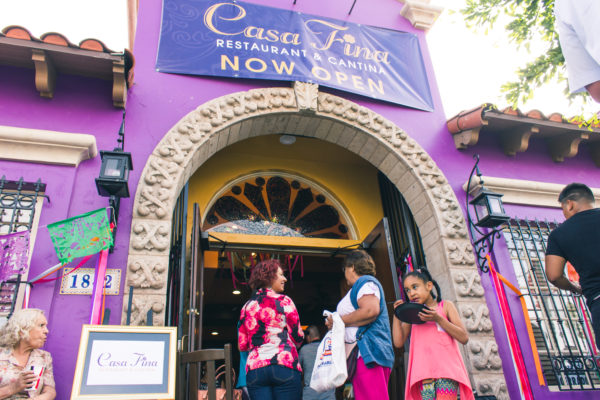 The restaurant owners, chef and representatives from city officials.

On Cinco de Mayo, playwright turned restaurateur Josefina López –along with restaurant owners Alonzo Ricardo and Emmanuel Deleage and Executive Chef Agustín Álvarez– opened the doors to Casa Fina and invited their neighbors in for a sneak peek of the new restaurant and cantina.

Representatives from the offices of Councilman José Huízar and Mayor Eric Garcetti attended the ribbon-cutting ceremony for Casa Fina, at the former location of La Serenata de Garibaldi, at 1842 East First Street. Chef Álvarez took his spot in front of the restaurant and behind a portable comal, serving free tacos to anyone who came by. The al pastor tacos were really good, showing the kitchen was already off to a good start. Aguas Frescas were also served, allowing visitors to wet their whistles while listening to the live music of the all-female Mariachi Las Colibrís.

The interior of the restaurant reminded me of a colorful hacienda in Mexico. Adorning the walls, a huge portrait of Salma Hayek looks straight onto the “cantina” or bar area, which serves only beer and wine and sits about 8-10 people. (That painting, along with others on the restaurant’s walls, are offered for sale.)

The following day, on Saturday May 6, the restaurant opened its doors for full service, serving Mexican dishes from a full, six-page menu. Casa Fina is a new venture for López, the founder of Casa 0101, a community theater a few blocks East of Casa Fina. One of the owners is her husband, Deleage, the executive director at Casa 0101. He joined forces with Ricardo, the owner of a successful string of Mexican restaurants, and his executive chef, Álvarez, to open Casa Fina.

In a press release, López said that her menu prices –between $9 and $12 for most entrees and $15 to $25 for specialties– are meant to attract local residents in an effort to “not contribute to the gentrification already plaguing Boyle Heights.”

A sign at the restaurant and a note in the menu indicate that a portion of the restaurant’s proceeds will go towards the operation of Casa 0101. “Our mission at Casa Fina will be to provide an excellent experience through exceptional personal service to our patrons by serving them delicious fresh food, with a unique, warm and vibrant atmosphere that leaves them inspired and feeling alive,” the release adds. “Our vision at Casa Fina is that we are part of the ‘artistic renaissance’ and a celebration of the best of Boyle Heights:  it’s people, food and culture.”

Extensive operating hours give you plenty of time to make your way down to First Street in Boyle Heights and welcome Casa Fina to the neighborhood.

The cantina will be open from 10:00 p.m. to 2:00 a.m. on Fridays and Saturdays with a limited Happy Hour Menu.  Valet Parking is available in the alley behind Casa Fina. For information and reservations: 323-604-9592 or [email protected]

All photos by Ernesto Orozco for Boyle Heights Beat.