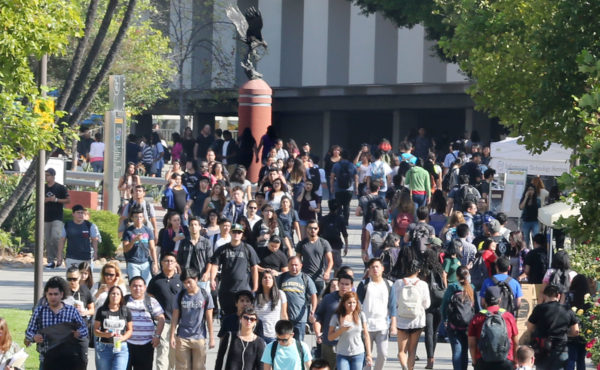 A Southern California speaking tour by Puerto Rican nationalist Oscar López Rivera –who was released from custody in 2017 after serving more than 35 years of a 55-year sentence for seditious conspiracy– will include a visit to Cal State Los Angeles this month. López Rivera, who turned 75 in January, will speak at the Eastside campus on Wednesday, February 7, from 1:30 to 3 p.m. The appearance, titled “Decolonization, Hurricanes and Solidarity: A Talk by Puerto Rican Patriot and Former Political Prisoner Oscar López Rivera” will take place at the Los Angeles room of the University Student Union. The visit is sponsored by the Chicana/o and Latina/o Studies, History, Latin American Studies and Pan African Studies department and hosted by the local group Puerto Ricans in Action.

The talk at Cal State LA is part of a busy, five-day tour that will mostly stop at college campuses in four Southern California counties. On Tuesday, Feb. 6 López Rivera will speak at Cal State Northridge before his main Los Angeles event: a private reception and community event at Dr. Maya Angelou High School in South LA, for which advance tickets are required. Before the Eastside campus talk, on Wednesday López Rivera will speak at Pasadena City College. On Thursday he will speak at Pomona College.

López Rivera has said that he is hoping to spark “critical thinking” among the youth that are part of the Puerto Rican diaspora in the continental United States and Hawaii –a population that at  4.2 million people, according to Census data, surpasses the number of residents in the Puerto Rican archipelago.

“I want to talk to them about Puerto Rico,” López Rivera said in an interview. “At least to let people have an idea of what’s going on in Puerto Rico, what the Puerto Rican people are suffering [under their colonial status]. But also to encourage the youth to think of Puerto Rico as their promised land, that there’s potential there for them and that they can help Puerto Rico become the nation that it has the potential of being.”

A condecorated Vietnam War veteran who moved from Puerto Rico to Chicago as a child, López Rivera was a leader of the Armed Forces of National Liberation or FALN, a Puerto Rican nationalist group tied to more than 100 bombings in various U.S. cities in the 1970s and ‘80s, including a 1975 attack at a tavern in New York that left four dead and dozens injured.

López Rivera was arrested in 1981 but prosecutors found no direct evidence linking him to the deaths; he was convicted of various charges, including seditious conspiracy, and sentenced to 55 years in prison. His sentence was extended 15 years after two escape attempts and he spent 12 years in solitary confinement at a federal prison in Terre Haute, Indiana.

After a long campaign for his release –with support from Pope Francis, former president Jimmy Carter and Archbishop Desmond Tutu– president Barack Obama commuted his sentence in January of 2017. A few weeks later he was released from prison and travelled to Puerto Rico, to serve the remainder of his sentence under house arrest in his daughter’s home.

He was freed in May and has since devoted most of his time to what he described as “community work” among Puerto Ricans in the archipelago and the continental United States.

While he has launched a series of “conversatorios” or chats that he hopes will have stops at all 78 Puerto Rican municipalities, López Rivera has also reached out to various Puerto Rican communities in the United States, including Philadelphia, Chicago and New York. In 2017 he spoke at UC Berkeley as part of a visit to the Bay Area and will have several dates in New York this week before traveling to Los Angeles.

While López Rivera found the independence movement in Puerto Rico to be splintered –only 6% of Puerto Rican voters chose that option in a recent election–  he said that Puerto Ricans in the diaspora will have a crucial say in the future of the archipelago.