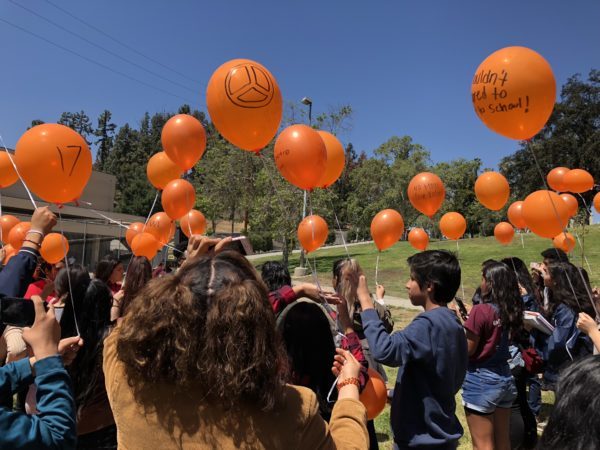 April 20th, 1999. It’s been 19 years since the Columbine High School Massacre, but school shootings are still a widespread issue today.

On Friday, April 20, various students from Bravo Medical Magnet High School in Boyle Heights walked out in memory of the teacher and twelve students that lost their lives at Columbine, Colorado. The event was organized by students and received support from the school’s administration. It took place from 10:00 AM to 12:00 PM.

Over 50 students walked out of school, shouting various chants while carrying posters and walking to nearby Hazard Park. They spent 13 minutes in silence for the Columbine victims. Afterwards, students and staff spoke in an open-mic conversation about gun violence. One of those students was Ethan Gabriel Parada.

“I hope that our voices will be heard,” said the 11th grade student. “We don’t want to have this fear of going to school and getting shot. We want to focus on our education.”

Brittany Flower, a Bravo senior and one of the student organizers, led the walkout with other students, to bring awareness to school shootings throughout the nation.

“Most adults believe that students shouldn’t be involved in politics because they’re students and policy-making doesn’t have anything to do with them,” said Flower. “In reality, we’re the ones being affected by this issue and our voices need to be heard.” The school sent out papers to every class before it was time for the walkout, stating that students would face no repercussion if they decided to participate. Participating students were cleared from being marked absent for the two periods they missed.

Many students pledged to mail their legislators and, if old enough, to register to vote for midterm elections this year. Students wrote various messages on orange balloons before letting them go at the end of the walkout.

Bravo was one of several schools across the L.A. area and nationwide that held a walkout on the 19th anniversary of the Columbine shooting. Some students also participated in voting registration drives.

Alex Medina is a senior at Francisco Bravo Medical Magnet High School. He is an avid runner and writer who leads the Gay Straight Alliance at Bravo in order to provide a safe space for LGBTQ youth and their allies. He hopes to attend a University of California school after high school.