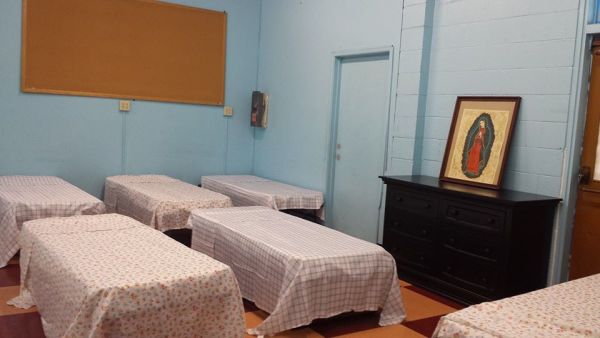 The Women’s Shelter will officially open on Dec. 12 and will provide 15 beds to homeless women. Photo courtesy of Raquel Roman.

After 26 years of providing shelter to homeless men in Boyle Heights, the non-profit Proyecto Pastoral has now opened its doors to women.

The Women’s Shelter will provide beds for up to 15 women for periods of 30 to 90 days and offer them English classes, work force training, food and lockers. The goal of the center is to prepare women to be self-sufficient and help them transition into permanent housing.

Raquel Roman, the shelter’s project director says they were excited to launch the pilot program and welcome its first two homeless women last week. “For these long-term homeless women, taking a warm shower and sleeping in a new bed with a pillow all of a sudden became super sacred. It feels like the right thing to do, to help more people,” stated Roman in a program newsletter.

On Dec. 12, 1988, Proyecto Pastoral, which provides educational and leadership services to the Boyle Heights community, also opened the Guadalupe Homeless Project at Dolores Mission, the first and only homeless shelter for men on the east side of Los Angeles.

Through out the years, however, there has been a need to also aid women. A need that is difficult to speak about for some community members.

“Its almost like”¦ there’s a stigma around women being homeless. You can see the lady walking down the street, you know she’s having a hard time and living probably in an alley, but we hadn’t really talked about it,” said Roman, who also directs The Guadalupe Homeless Project.

The Women’s Shelter targets single women over the age of 55 and will also provide them with mental health services through a partnership with Amanecer, a non-profit organization that provides mental health and domestic services to low-income and homeless people.

Roman shared that specific women have been on her mind as the project has developed. One of them was Lorenza Arrellano, a woman who was found dead at Hollenbeck Park’s lake earlier this year.   She would use the park as a place to sleep at night.

Arrellano would visit Proyecto Pastoral often, stopping by to eat and spend time with Roman and other participants.

“At the moment I thought we were doing enough for her,” Roman said.

Arrellano’s was a tragic death for the community, and like her, many women around the area continue to roam around homeless. According to the Los Angeles Homeless Services, a funder for the new women’s shelter, there are 12,449 homeless women in the county. Roman says, however, that many women are still not accounted for in that estimate because they often stay at hospitals or on buses during the night to feel safe.

Roman is hopeful that the new Women’s Shelter will help ease the issue.

“I think homeless issues are much bigger than us here in Boyle Heights, than in L.A. It’s the whole country that’s facing a homeless crisis and we cant just move people from one area to another. I think we have to be proactive in solving these issues,” Roman said.

The Women’s Shelter is located at the Proyecto Pastoral’s administrative offices at 135 N. Mission Road, Los Angeles, CA 90033. The organization will host an official opening on Dec. 12, 2014 with a blessing dedication at noon.

More information on the Women’s Shelter can be found at www.proyectopastoral.org or by calling (323)881-0032. Questions can also be emailed to [email protected].