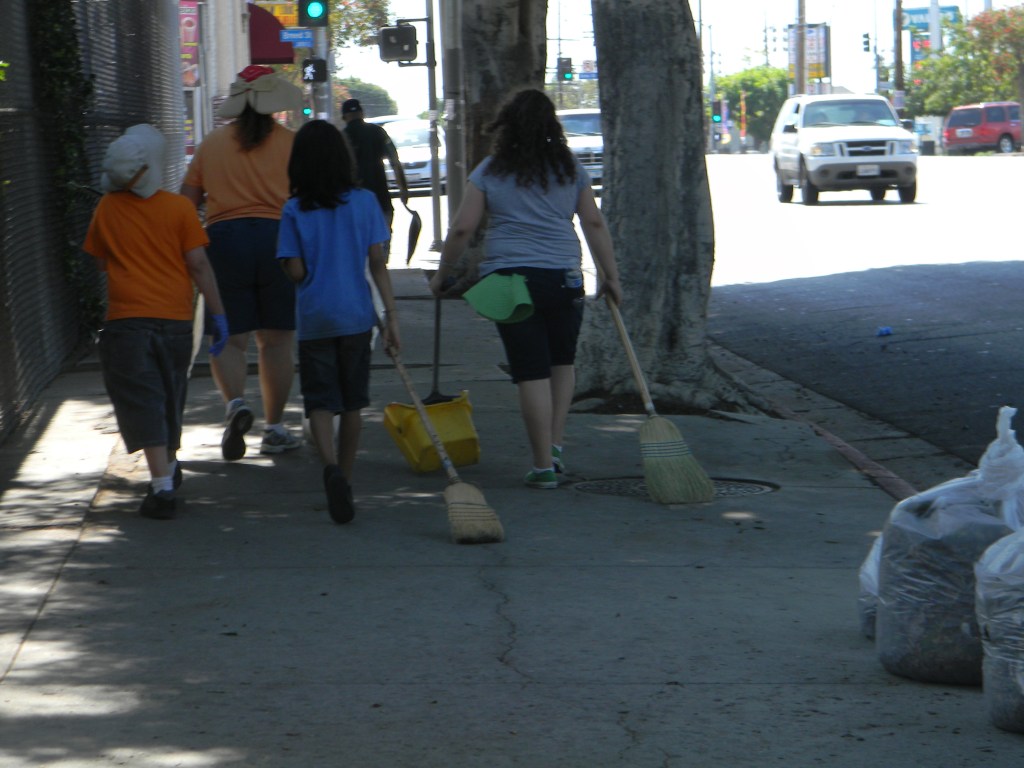 Fed up with the trash problem, community residents do their part to beautify their neighborhood. Photo by Dulce Morales

Abandoned couches, mattresses and television sets are a common sight on the sidewalks of Boyle Heights. Illegal dumping continues to happen under freeways and in empty lots. It’s so common that city officials say they can’t keep up with the demand for hauling away bulky items.

Some residents, fed up with what they perceive as lack of pride in their community, are taking matters into their own hands and doing their part to beautify the neighborhood, as well as educate others. Safety was once the primary concern of Boyle Heights’ residents. But now, with record low crime rates, many community members are focusing on how their neighborhood looks.

“The biggest issue I hear about the community right now is the cleanliness,” says District 14 City Councilman José Huízar, who says that the focus has definitely shifted among his constituents. This change of attitude is prompting volunteer efforts and new initiatives regarding trash and beautification.

On a Sunday morning in May, dozens of volunteers began gathering outside the Salesian Boys and Girls Club to participate in a community cleanup. Volunteers of all ages signed in to receive a task.

Taking responsibility
Mónica Salas, a Boyle Heights resident and volunteer, says, “I feel it’s really important to be out in the neighborhood and empower others to take that step to clean up their community and take responsibility of how it looks.”

A yellow city truck brought shovels, brooms, bags, gloves and rakes for volunteers to use. Tables were set up with breakfast snacks and pamphlets about city services.

The cleanup, organized by Amanda Mejía, a 24-year-old Boyle Heights resident, was the third of its kind this year, and Mejia plans more. She hopes the cleanups will help residents take ownership of the issue.

“People see us cleaning, and a lot of the times people think it’s weird,” she says. “My main thing is getting a group out there, and when they see us, then they get involved.”

With community cleanups and new initiatives, including additional trashcans, bulky item pick up and fines for illegal dumping, community leaders and residents are making an effort to positively impact the area.

The $1.5 million pricetag is being paid for from the city’s budget, an allocation of $500,000 from Councilmember Huízar’s discretionary funds and a special $250,000 grant from the city for sidewalk repairs.

Sofas and mattresses
One of the biggest trash issues in Boyle Heights is the disposal of bulky items. Sofas and other large items like mattresses still show up in front of buildings and on sidewalks. 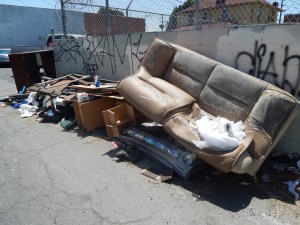 One of the biggest trash problems in Boyle Heights is the disposal of bulky items. Photo by Jackie Ramirez

Councilman Huízar says one reason that so many bulky items are left on the streets is that 75 percent of Boyle Heights residents are renters, who often leave their old furniture behind when they move. While residents can call the Bureau of Sanitation to pick up items, it often can take more than a week because of the number of requests. Now, with roving trucks, bulky items will be picked up more frequently.

Overflowing trashcans and illegal dumping in alleys are also contributing to the uncleanliness of the community. While some people use commercial bins to get rid of their trash, others dump illegally along dark streets or alleys.

Huízar says surveillance cameras should help put a stop to this practice. “We’re going to have cameras installed to catch those doing the illegal dumping,” he says. “We have found that in some areas where it’s dark and secluded, the same individuals keep going back to illegally dump trash.”

Those who are caught dumping will be fined. Huízar says a similar pilot program in El Sereno was successful.

Alejandro Jimenez, a Roosevelt High School student, volunteered in the May 4 cleanup. He says, “For me, it’s uncomfortable to see trash in every corner. That means that people don’t really care about where they live. I think it’s really sad to see that people are actually trashing their own community.”

Mejía, who just graduated with a master’s degree in social work from the University of Southern California, says she was inspired to do something by her mother’s complaints about the Evergreen cemetery’s jogging path. She decided to use the community-building skills she learned in school to better her own neighborhood

Mejía created a Facebook event for the cleanup and saw the number of volunteers grow to 150 in just a few days. The event even caught the attention of Mayor Eric Garcetti’s office, which provided a representative from the Bureau of Sanitation and resources, including cleaning supplies, water, tables and portable toilet.

Mejía says she has met with Councilman Huízar’s staff to discuss working together. The increase of resources, along with the community involvement, has motivated Mejía to continue her work. Each of her three events attracted more than 150 volunteers.

Mejía is mapping trash “hot spots” and plans to share the information with other communities. She plans more cleanups in hopes of raising awareness and making her neighborhood a place to be proud of.

“Boyle Heights is strong when it comes to community. It’s just a matter of bringing people together, but in a positive way,” Mejía says.

Want a chance to help clean up your community? Attend Boyle Heights Rising Presents: Summer Clean up
When: Saturday, July 19at 8:30am – 12:30pm
Where: Pets for Life
2940 E 1st Street
Los Angeles, CA 90033
RSVP on Facebook