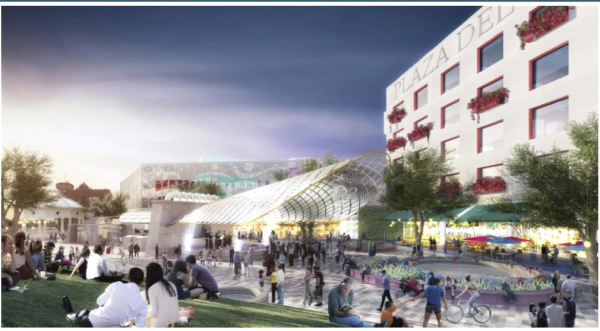 Correction: This story incorrectly stated that the Boyle Heights Neighborhood Council voted down the plan’s development contract and that the vote last week served as recommendation to the Los Angeles City Council. The story has now been updated to reflect that the decision was made by the Council’s Planning and Land Use Committee and instead serves as a recommendation to the general Boyle Heights Neighborhood Council.

A controversial plan by the Metropolitan Transportation Authority that would transform Mariachi Plaza was unanimously voted down last week by a Boyle Heights Neighborhood Council committee, advice that will now go to the general council for a full vote early next year.

The vote reviewed Metro’s plan to enter into an Exclusive Negotiation Agreement (ENA) with its contractor Primestor Development Inc., whose proposal included the construction of two buildings with retail and parking facilities, a fitness center and medical offices adjacent to White Memorial Hospital.

Last month, the transportation agency received backlash from the community when it sought an initial approval for the development that would occupy Metro-owned land and private land around the area of 1st and Boyle streets. Many residents and business owners said they disagreed with the plan to demolish several small businesses, and said they deserved more community input. Soon after, the MTA board decided to hold off on voting on the contract approval until February to allow more time for community members to have a their say.

The dissatisfaction continued on Thursday, when residents and local leaders packed the Council’s Planning and Land Use Committee meeting at the Benjamin Franklin Library to share their frustrations over Metro’s handling of the proposed development.

“I suggest they take a step back and start again by talking to the community first,” said Daisy Cuellar, Director of Promesa Boyle Heights.

Jenna Hornstock, Metro Deputy Executive Officer of Countywide Planning, opened the meeting by acknowledging that the agency had not involved the community as much as it should have.

“I want to start off by apologizing for not communicating with the residents of Boyle Heights in the past,” said Hornstock.

She went on to say that Metro was in the community now and ready to talk to residents.   She also said if that meant starting over, then that is what Metro was prepared to do.

“Huizar is not happy with the Mariachi Plaza project proposal,” said Ocubillo.   “He encourages Metro to communicate more with the community.”

Council President Carlos Montes said White Memorial Hospital has had plans to expand on this property for some time now. “I oppose the project. We don’t need a big, giant medical facility and parking that already exists.   We don’t want our local business people displaced,” said Montes.

The Boyle Heights Neighborhood Council committee also voted on another contract for the Metro-owned parcel at the First and Soto streets Gold Line station, which includes an 88-unit affordable apartment complex and more than 16,000 square feet of retail space. The motion to deny an exclusive agreement on this property with the Bridge Housing Corporation/East Los Angeles Community Corporation failed with three members against, two for, and one abstention.

The vote for the Chavez and Soto development that plans to add 77 affordable family rental homes and an 8,000-square-foot commercial space will be taken at the next Planning and Land Use Committee meeting Jan. 8, 2015.

The PLUC votes serve as a recommendation to the general council, which will take on the reviewed issues at the next general meeting on Jan. 28, said Montes.

Other concerns raised by community members at the meeting were the lack of green spaces in Boyle Heights, the need for local retail outlets and the displacement of local businesses by Metro development.