A petition drive organized by InnerCity Struggle and California Calls at the corner of Cesar Chavez and Soto last April.
Photo by Andrew Román.

Boyle Heights Beat published a version of this story in September.

With Election Day just a day away, citizens across the United States are preparing to vote on the best candidates for president, senators and representatives, as well as state propositions.

Many people everywhere are asking, “How will the propositions affect our community?” “What will happen next with immigration reforms?” “Who will be our next president: Democratic incumbent Barack Obama or Republican Mitt Romney?”

Boyle Heights is affected by decisions made by politicians in Washington just like any neighborhood across the country. But with a large number of infrequent voters and many undocumented residents who cannot vote, Boyle Heights’ residents are not making their voices heard.

“Sometimes a lot of people don’t even show up to go vote,” said Lupe Loera, 72, a long-time Boyle Heights resident who has served as a poll worker at the Aliso-Pico Recreation Center for about 10 years. “(We) need to look at what’s going on,” she says about the many issues plaguing her community.

In the 2008 presidential election that brought President Obama into office ”“ a time of record highs in voter participation nationally ”“ 24,749 Boyle Heights residents were registered to vote, out of approximately 62,645 adults. Of those registered voters, about a third ”“ 8,000 ”“ actually voted. Only citizens can vote, so not all adults are eligible.

Community activists have been working hard to change the low voter turnout in Boyle Heights and to increase political participation. Among them is Alicia Ortiz, 49, an undocumented mother of five. She encourages people to become more civically engaged even though her immigration status prohibits her from voting.

The East L.A. resident volunteers at InnerCity Struggle, an organization that promotes safety and non-violence in her community.

“I’m missing out on many things, many opportunities, many services,” Ortiz says. “I would like to be able to choose my president and my community representatives and have better people represent us as parents and as community.” 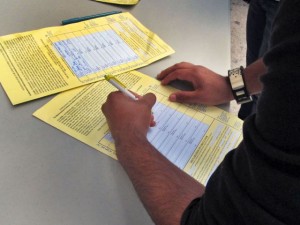 A community member signs a petition for a ballot initiative that would increase taxes on the rich. Photo by Andrew Román.

On a Sunday afternoon last spring, Ortiz went out on the streets of Boyle Heights asking U.S. citizens to sign a petition to put a proposition on the ballot that would increase taxes on the rich. She feels the work she is doing promotes positive changes and encourages people to have their voices heard.

“Changes are good, to not remain static,” she says.

But efforts by advocates to increase voter participation don’t always meet with success.

“Very often, voters in the Boyle Heights area don’t get reached out to,” says Elisa Sequeira, program manager for civic engagement at the National Association of Latino Elected and Appointed Officials (NALEO), an organization that promotes participation of Latinos in the American political process.

And even those who are registered don’t always vote.

“Usually they are new voters or infrequent voters and are not familiar with the voting process,” Sequeira  added.

NALEO has highlighted the immigration issue to improve voting in Latino communities. Last spring, the organization partnered with L.A. Voice, a nonprofit that that teaches people to speak, act and engage in the public arena, to host a naturalization workshop at Our Lady of Talpa Church in Boyle Heights. Hundreds attended.

Voting “has a purpose,” says Gerardo Parejas, 39. “I get more responsibilities that I’m open to and benefits that I hope to have.”

Parejas drove from his home in Anaheim to Boyle Heights with his naturalization paperwork, arriving at 5 a.m., to wait for the workshop. He believes that voting is a privilege one can use to help better his community.

“We need a voice to choose our own representatives,” he says. “Maybe one person will not make a change, but here you see 200 to 300 people, and together we can make a difference.”

NALEO targets Latino communities like East L.A. and Boyle Heights because they tend to have large populations eligible for citizenship. Although Loera, the poll worker from Boyle Heights, was born a U.S. citizen, she only began voting in her mid 40s after she witnessed heavy gang violence in the streets of Boyle Heights.

Over the years, she’s seen her polling station close due to lack of registered voters. She doesn’t know why people don’t take advantage of their right to vote. She sees casting her ballot and working the polling station as fulfilling a duty to her community.