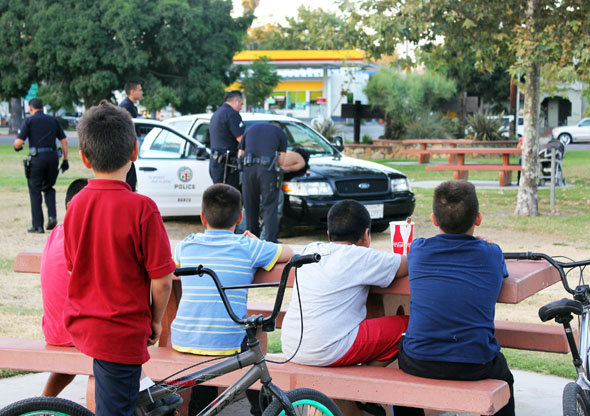 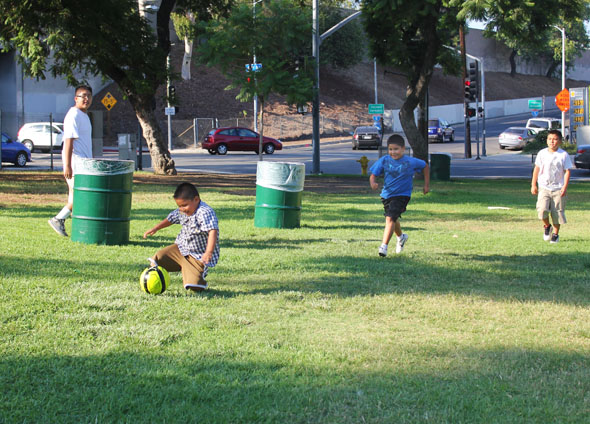 On a typical Wednesday evening, Ramón Pérez plays soccer with his children in Hollenbeck Park, setting up trashcans as goals and running past the tall green and white sign that says clearly, “No Soccer.” Shouts of “Go, son, go!” and “Kick it over here, son!” echo from the lively game on a small patch of grass.

Soccer is forbidden at Hollenbeck Park, Boyle Heights’ most famous park, because it has been designated a “leisure park” only. The heavy traffic nearby, caused by freeway on- and off-ramps, makes playing sports there dangerous, officials said.

Pérez, who has lived in Boyle Heights for 18 years, ignores the rule because the park, around the corner from his home, is the best place nearby to play soccer. Like many local residents, he would welcome more open spaces to play with his children.

Boyle Heights, with more than 80,000 residents, has about 10 public parks and ranks as one of the city’s most “park poor” neighborhoods, according to Ramya Sivasubramanian, assistant director and counsel for The City Project, a nonprofit organization that seeks equal access to green space for low-income communities.

“There is competition for green space,” said Seth Strogin, an urban planner and expert on park access issues in Los Angeles. “There is a need for green space everywhere. In Boyle Heights, there are a lot of residents, and there is not a lot of green space.” 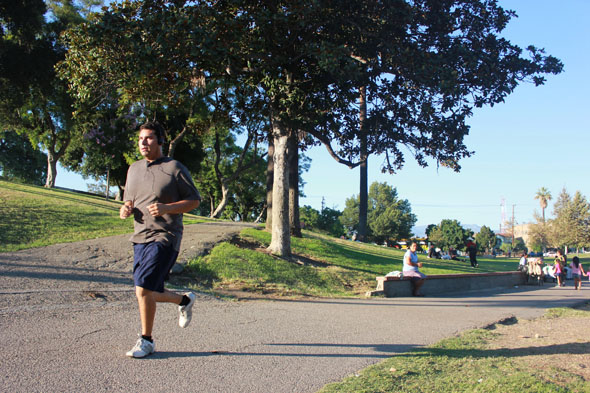 Young and old make use of the limited available park space. Photo by Jennifer Lam.

Even when parks are nearby, some community members say they can’t always find a place to play a casual game. The city requires permits to reserve space for organized sports, parties and other private events.  Permit priority goes to seasonal leagues, so most park fields are reserved for sports teams.

“It’s very difficult to get a permit,” said José Vélez, a Boyle Heights soccer coach who practices at Pecan Park on Pecan Street. “We don’t have many parks with soccer fields, and the ones that do are often booked.”

While Vélez’s team has a place to play soccer games, it often has no place to practice and ends up at Hollenbeck Park despite its no-soccer policy.

Requiring permits “means that there are established rates and fees that apply citywide,” said Verónica Rodríguez, a recreation supervisor who oversees the East L.A. area for the City of Los Angeles Recreation and Parks Department. The price of permits varies, but generally ranges from $20 to $50 an hour. Factors that affect the cost include how and when people want to use the park and if park staff are required.

A permit is needed only for an organized sports team, not for someone who just wants to kick a ball with his son or play. But residents complain that places to play a pickup game are limited. And park officials acknowledge that finding an open space at a convenient time may not be easy.

“Our programming comes first, and then it’s open to the public,” said Sophia Piña-Cortez, the department’s superintendent for the Griffith-Metro region.

In 2009, the Boyle Heights Sports Center was refurbished. A state-of-the-art multipurpose field that can accommodate baseball and soccer games was added, as well as a gate to protect the field and control access. Longtime residents feel that the park has become less accessible as more leagues have booked the space.

“We used to do everything there ””  play football, play baseball whenever we wanted. Now, there is nowhere to play,” said Raúl Ruiz, 43, a Boyle Heights resident who grew up going to the Boyle Heights Sports Center. “They have the whole field gated off because it’s an artificial turf, so you have to be on a team or have a permit to go out and use the field, which I thought was kind of messed up.”

Safety at parks is a recurring concern for residents. While children were riding their bikes and playing tag on a recent evening at Hollenbeck Park, a man who seemed drunk stumbled around. He eventually fell asleep on the grassy field, while kids played and families picnicked.

About an hour later, police arrived and arrested the man. One park regular said the man had been troublesome at Hollenbeck multiple times and posed a threat.

Children at Hollenbeck Park witness the arrest of a man for public drunkenness. Photo by Jennifer Lam.

Piña-Cortez, the regional park supervisor, said park managers meet regularly with public safety officers “when there is an issue of concern, like loitering, or homelessness, or gang activity, drug sales, or whatever.”

But due to budget cuts, the department has had to reduce safety patrols at parks. Fewer park rangers leads to what park officials call “dead parks,” a term used to describe parks with no safety supervision.

“The challenge right now is resources,” said Rodríguez, the East L.A. area supervisor. “The department is cutting down on staffing and funding. Funding is so low that we just can’t do everything that we’d like to do.”