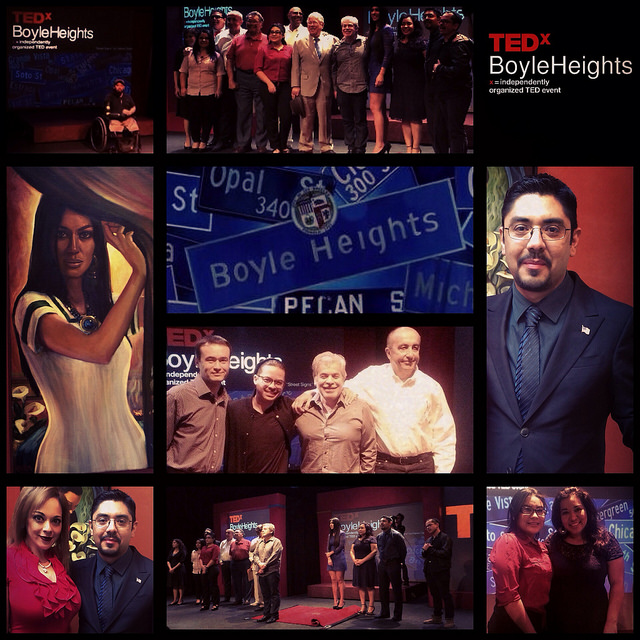 A celebration of the tradition, culture and future of Boyle Heights, as told by the eastside community’s native sons and daughters, packed CASA 0101 Theater earlier this month.

The TEDx Boyle Heights event was independently produced and derived from the TED nonprofit known for its videos on talks with various speakers fostering technology, entertainment and design.

The event was designed to highlight the richness, creativity and perseverance of its immigrant community, as speakers from throughout the U.S. gave personal accounts of the struggles and triumphs associated with growing up in the region.

Stephany Ortiz, one of four award-winning students from Theodore Roosevelt Math, Science and Technology Magnet School, told the story of how her dad inspired her to excel academically through his hard work and dedication to his family.

Like many Mexican immigrants, her father came to this country to look for a better life for himself and his future family.

“I saw how much he had to go through as an undocumented worker. He was my role model,” said Ortiz.

The Roosevelt senior was part of the team of Latino presenters who were the first ever at the Emerging Frontiers in Research and Innovation (EFRI) conference in San Diego last year.

“We set-out to find educational inequalities within the education system. We found that students who dropped-out of high school came from low-income communities,” said Ortiz.

Classmate and team member Roxana Ayala told the audience how she grew up without parents in the Watts community before coming to Roosevelt.

She said that her school in South L.A. was not conducive to learning with police patrols and security everywhere.

“We were being watched all the time,” said Ayala. “This is not a school. It feels more like a jail.”

She decided to do something about her academic future and found Roosevelt, and even though it meant getting up at 5:30 every morning to go there, she was determined.

CASA 0101 Theater founder Josefina Lopez recited an original poem called “Caught between Two Worlds,” that detailed the struggles of being a Latina woman in a male-dominated society.

She focused on women and their body images and how Hollywood has perpetrated an unattainable ideal of what women should look like.

Amid the stories of personal struggles came a look into the future of Boyle Heights from Philippe Forestier, executive vice president, global affairs and communities for Dassault Systemes.

Forestier spoke of the shortage of engineers that exists today and how his company plans to invest in Boyle Heights to help close the gap by improving education in the region.

“Engineering and manufacturing is changing because of the power of the computer,” said Forestier.

“The lack of talent is becoming a worldwide issue and that is why we are investing in this community,” he added.

Forestier called Boyle Heights a huge resource that can “fill the needs of the future.”

Jose Huizar, 14th District councilmember, opened the event with a historical perspective saying that Boyle Heights has traditionally served as a platform for moving on to new destinations and how that is now changing.