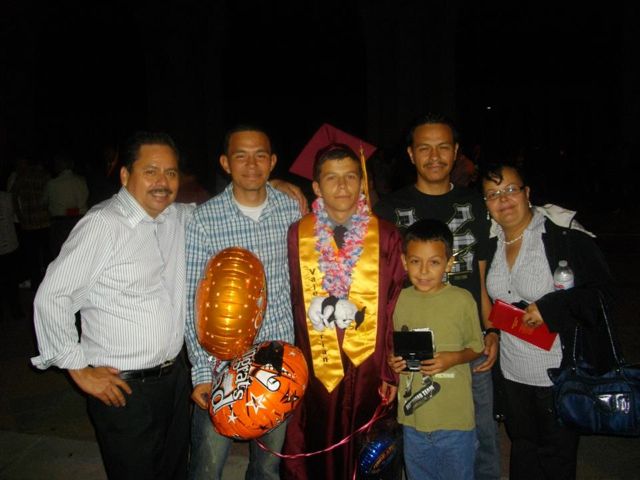 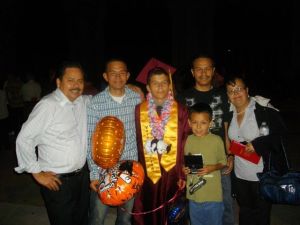 Gerardo Lerena had a decision to make that would be the envy of most high school seniors: Yale, Princeton, or MIT.

Lerena was the valedictorian at Theodore Roosevelt High School, graduating this year with a 4.28 grade point average. He decided to attend Princeton University in New Jersey in the fall.

Applying to ”“ and waiting to hear back from ”“ colleges is a big part of the senior year in high school, no matter what neighborhood you live in. In Boyle Heights, less than three percent of residents have a college degree, according to the U.S. Census Bureau, so many graduating students will be the first in their family to go to college. Even so, some will attend the top universities in the country.

Administrators have not yet calculated how many Roosevelt students will attend four-year universities this fall, but say that three-quarters of its seniors met the minimum requirements needed to attend a four-year institution. At the Felicita and Gonzalo Mendez Learning Center, 82 percent of its 72 June graduates are going on to a four-year college.

The Boyle Heights students’ success in Ivy League admissions occurred even though it was harder than usual to get into many of the nation’s top ranked schools this year. Many accepted a lower proportion of applicants than previously. This year, Yale had a 6.8 percent acceptance rate, compared with 7.35 percent last year, and Harvard University accepted a record low percentage 5.9 percent compared with 6.2 percent last year.

Like many students in his graduating class, Lerena’s first language was Spanish, so he had an additional challenge at school. During high school, he ran two marathons for Students Run LA; was a member of the cross-country and track and field teams; and spent seven weeks at Princeton University for Leadership Enterprise for a Diverse America (LEDA), a student leadership program.

A Free Ride
Lerena has received the Gates Millennium Scholars Award from the Bill & Melinda Gates Foundation, founded by the chairman of Microsoft and his wife. It is provided to 1,000 high school seniors each year and covers all educational costs after high school, which can include undergraduate and graduate programs.

Stephanie Haro, another Boyle Heights resident, also had three top universities to choose from. The Garfield High School graduate was accepted at Harvard, Dartmouth and Brown universities. After careful consideration, she decided to attend Brown this fall because the students she spoke with on a visit really liked Brown. 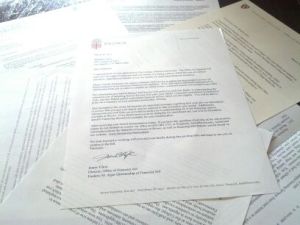 Haro worked hard to prepare for college. She was in her school’s academic decathlon for three years, interned at the Jet Propulsion Laboratory in Pasadena and spent six weeks at MIT for an engineering program. She says she motivates herself by asking herself the following questions: “Who am I? What do I want to do with my life? What am I passionate about?”

Help from a Counselor
Teresa Carreto, the college/career counselor at Roosevelt, says that not all students are self-motivated and often she has work to instill motivation. “We make them believe that they can do it, because we know they can,” she says.

In a community where the majority of parents did not graduate high school, Carreto says that students often lack support for their higher education goals. Their parents want to help, but often can’t because of their own lack of higher education.

Sofia Arévalo, Roosevelt’s school-wide salutatorian, came to the United States when she was eight years old. She didn’t speak English. School was tough for her, but while at Hollenbeck Middle School, her family encouraged her to pursue her dream of becoming a mechanical engineer. The death of her grandfather during her high school years distracted her initially, but it ultimately motivated her to challenge herself and excel in her studies.

Her hard work paid off. She was accepted into UC Berkeley’s prestigious College of Engineering, which she will attend in the fall. Because she gained citizenship three years ago, she was able to receive government aid. “I am glad and grateful because not many students have the same opportunity as me,” Arévalo says.

While more students in the area are attending college, recent budget cuts and the loss of the college-prep program Gear Up in Boyle Heights schools could jeopardize progress in the future. “Unfortunately, education is not a priority in our state of California,” Carreto says, adding that the loss of Gear Up will definitely hurt students in the community.

Even though students have huge obstacles to overcome, Arévalo hopes the youth in Boyle Heights continue to improve their academic performance. She says, “The journey to fulfill your dreams may be tiresome, but in the end it will be worth it.”